It was the first time that not just one but two Members of Parliament graced the event—Henry Kwek from the People’s Action Party (Kebun Baru SMC) as well as Jamus Lim from the opposition Workers’ Party (Sengkang GRC).

For the first time since the Covid-19 pandemic began, the Pink Dot event was held again on Saturday (June 18) at Hong Lim Park.

It was also the first time that not just one but two Members of Parliament graced the event—Henry Kwek from the People’s Action Party (Kebun Baru SMC) as well as Jamus Lim from the opposition Workers’ Party (Sengkang GRC).

The event, the most significant one in Singapore for the lesbian, gay, bisexual, transgender, and queer (LGBTQ) community, was well-attended, with CNA reporting organizers saying that thousands attended.

Between the two MPs, Mr Kwek was the more visible attendee. He visited different groups at the community tent, talked to and took photos with the people who came, and even wore a pink shirt, just like most attendees did.

Assoc Prof Lim, in contrast, has only been featured in one photo from the event so far. One commenter on the PinkDotSG Instagram page said that he arrived with his family at around 5 pm.

A tweet from Xinghui Kok, a correspondent for the South China Morning Post based in Singapore said he had come “in his personal capacity.” Pink Dot spokesperson Clement Tan told members of the media that MPs are invited to the event yearly.

“We think it’s important if you want to know more about the community that they meet us face to face, to hear about our issues. So for a Member of Parliament to be here today, we think it’s an encouraging sign of progress,” CNA quoted Tan as saying.

The Kebun Baru MP was praised by many. Indeed, many news outlets reported that he was the “first-ever” MP to come to Pink Dot. 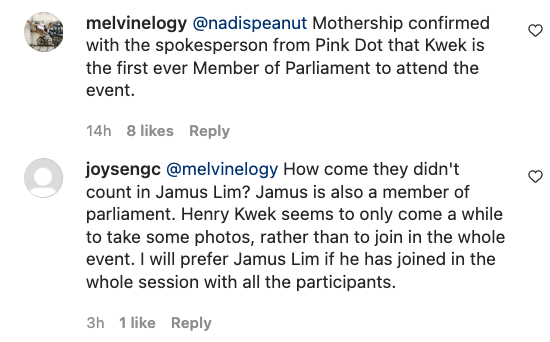 Some, however, appeared to question why he had only stayed for a short while, but made his presence felt, while Assoc Prof Lim kept a lower profile.

But between the two, the WP MP may have the bigger hurdle to overcome, as several commenters mentioned that WP’s “inaction and its toleration of homophobia within its ranks.”

In 2014, the Wear White campaign was supported by Faisal Manap, Member of Parliament for Aljunied GRC and Vice-Chairman of the Workers’ Party.

And others made the point that in the end, what’s important is that the MPs take action on behalf of Singapore’s LGBTQ community.