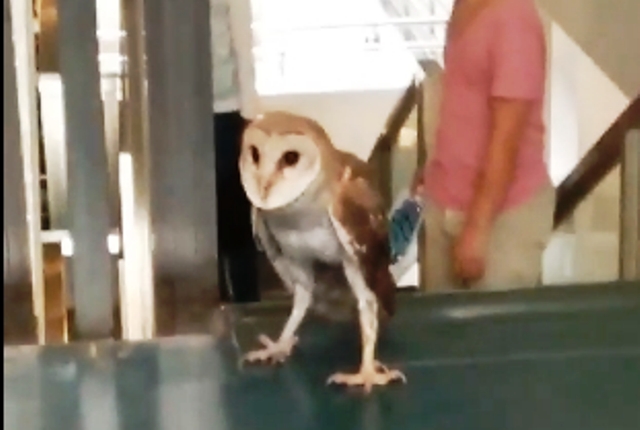 The local Twitterati went gaga over an owl that visited Temasek Polytechnic. The video clip first shared by Twitter user Tiq has been retweeted almost 1,000 times since it was posted. Temasek Poly which responded to enquiries from the media about the bird, said that it was found in the polytechnic’s School of Design, and that although it appeared to be frightened, it safely flew off to safety later.

The medium sized bird with no ear-tufts and a heart-shaped face is the common barn owl (tyto alba). According to the blog International Year of Biodiversity, the common barn owl is a widespread species that is found on every continent except Antarctica, and is the only local species of owl that is mentioned in the Harry Potter stories.

“It earns its name due to the fact that it is often found nesting in buildings, occupying barn lofts and attics in houses. An account of the nesting habits of the barn owl can be found here.

A bird of open areas and grasslands, this owl is considered to be an excellent form of rodent control. In Malaysia, barn owls are encouraged to breed in nest boxes placed in oil palm plantations and rice fields, so as to reduce crop losses from rats, which can become very abundant in agricultural areas. In fact, barn owls were uncommon in Singapore until the 1960s and 1970s, when the population exploded in Peninsular Malaysia as a result of the spread of oil palm plantations. No doubt, many owls dispersed from these plantations in search of new hunting grounds, and some must have made their way to Singapore.

Recently, there have been a number of incidents in which barn owls accidentally enter underground MRT stations, requiring people to remove them. For example, an owl was seen at Toa Payoh in February this year (2011).

In March (2011), the Animal Concerns Research & Education Society (ACRES) Wildlife Rescue team rescued a barn owl that had flown into Stadium MRT Station. Similarly, it had to move an barn owl that had become trapped inside Punggol LRT Station, and guide it to the exit.

Despite being common in many places throughout the world, barn owls do face a variety of threats. For example, it has been claimed that barn owls used to be more abundant on Sentosa, but many died as a result of eating rats that had consumed poison.

Because they favour open areas, and often fly close to the ground, barn owls are at great risk of being struck by vehicles. One such possible victim of a collision with a vehicle was found in the Marina Bay Golf Course, and did not survive.

Elsewhere, barn owls have been found electrocuted by live wires, while here in Singapore, another threat comes from discarded fishing lines that are sometimes irresponsibly left behind in trees. Birds (including barn owls) are inadvertently entangled and often end up strangling or seriously injuring themselves as they struggle to break free. One such incident occurred at Punggol Beach in August 2009. Distressingly enough, the people who witnessed it did not know who to contact, and watched the owl die.