Town council faces fine for non-compliance, chairman or secretary can also be fined and face a jail term

The strong online support for the Workers’ Party after the Ministry of National Development issued a rectification order to Aljunied Hougang Town Council has led to speculation that the move could backfire on the ruling People’s Action Party at the polls.

On Friday (Jan 3), National Development Minister Lawrence Wong ordered the AHTC to restrict Aljunied GRC MPs Sylvia Lim’s and Low Thia Khiang’s powers over financial matters at the town council they have been elected to represent.

In October last year, Ms Lim and Mr Low were found liable for damages by the High Court in the AHTC civil lawsuit. The MPs have since filed an appeal against the decision.

Although the legal case is yet to conclude, Deputy Prime Minister Heng Swee Keat introduced a motion in Parliament last month to get AHTC to make Mr Low and Ms Lim “recuse themselves” from its financial affairs. The motion was passed 52-9 in the PAP-dominated Parliament.

AHTC town councillors, however, subsequently voted that the MPs did not have to recuse themselves from its financial matters. Days after the AHTC vote, the ministry asked why the MPs had not recused themselves.

The ministry has now ordered the town council to limit the MPs’ powers over AHTC financial matters or face a fine for non-compliance. The AHTC can be fined up to $5,000 for not complying with the rectification order by the deadline and can incur $50 each day it continues to ignore the order after conviction.

The chairman or secretary can also be fined the same amount and face a maximum 12-month jail term over non-compliance.

While some online have welcomed the ministry’s action, the majority of netizens responding to reports on the rectification order have pledged to support the opposition party come what may and have criticised the Government for trying to “fix” the opposition: 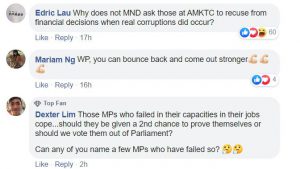 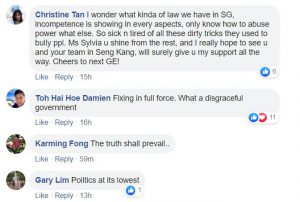 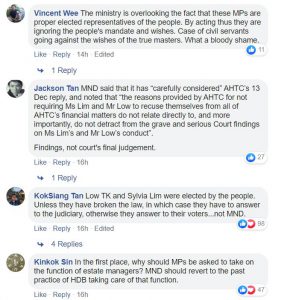 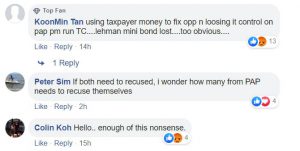 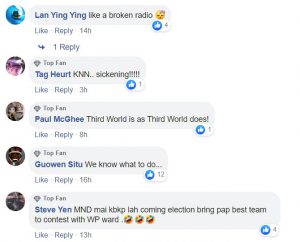 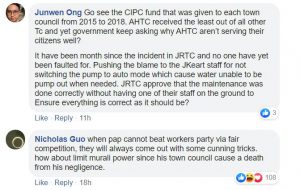 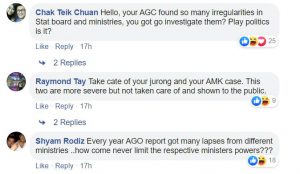 The phrase “fix them” (the opposition) was in a speech by Prime Minister Lee Hsien Loong in 2006, when Mr Low, Mr Chiam See Tong and Mr Steve Chia were the only opposition politicians in Parliament.

Urging the people to refrain from voting in more opposition lest he was forced to focus on how to “fix them” instead of on the nation’s challenges, Mr Lee said: