Netizens have pledged to support the Workers’ Party (WP) and vote for them in the looming polls in the wake of the Government’s latest statement that Aljunied GRC MPs Sylvia Lim and Low Thia Khiang should recuse themselves from Aljunied-Hougang Town Council’s (AHTC) financial affairs.

The majority of netizens commenting on online news reports covering MND’s statement, however, have expressed support for WP and have asked why the Government seems to be so fearful of the opposition MPs.

Pledging to vote for the WP, netizens have opined the Ministry of National Development’s statement looks like another way to “fix” the opposition party and they are speculating that this latest action may backfire against the ruling party in the upcoming elections.

In October, Ms Lim and Mr Low were found liable for damages by the High Court in the AHTC civil lawsuit. The MPs have filed an appeal against the decision in the apex court.

Despite the fact that the legal case is yet to conclude, Deputy Prime Minister Heng Swee Keat introduced a motion in Parliament last month to get AHTC to make Mr Low and Ms Lim “recuse themselves” from the Town Council’s financial affairs.

Although DPM Heng fumbled when confronted with the WP’s position that they are appealing against the High Court decision, the Parliament voted his motion with 52 votes for and nine against.

On Nov 30, however, AHTC town councillors voted on whether Ms Lim and Mr Low should recuse themselves from AHTC financial matters and decided that the MPs did not have to do so.

Days after the AHTC vote, MND has asked why the MPs have not recused themselves.

Asserting that AHTC should take immediate interim measures to safeguard its procurement and payment processes for the sake of good governance, MND said, “Until and unless the Court findings in respect of Ms Lim’s and Mr Low’s conduct are reversed by the appellate Court, they remain good and should be taken seriously by AHTC.”

The Ministry has written to AHTC to understand their reasons for not requiring the elected MPs to recuse themselves from the Town Council’s financial affairs.

It added that it is considering whether to take regulatory action “to ensure the proper safeguarding of public monies entrusted to town councils” and will make a decision after receiving AHTC’s reply. AHTC has said that it will reply by the Dec 13 deadline.

The Government attributed AHTC’s performance in corporate governance to auditor KPMG “which assisted AHTC in its remediation of past control failures and audit points” over two years.

Casting aspersions over whether the measures KPMG implemented would adequately “guard against the recurrence of the past control failures” if Ms Lim and Mr Low remained involved in AHTC’s financial affairs, MND said, “the adequacy of the measures is entirely dependent on their implementation by the individuals involved with AHTC’s financial affairs.”

Below is a sampling of the comments from netizens found online. 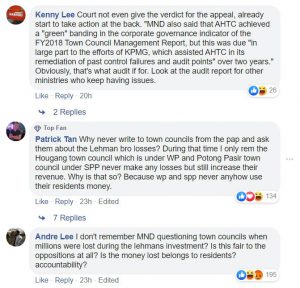 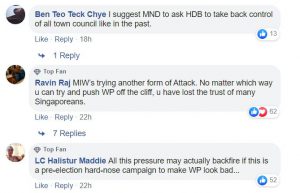 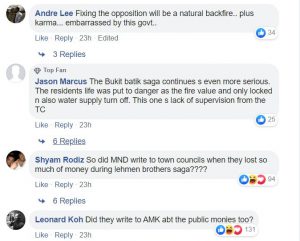 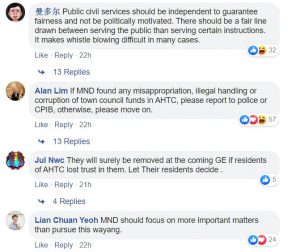 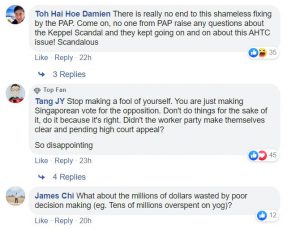 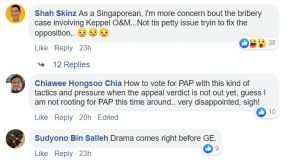 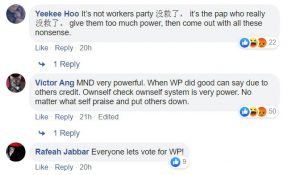 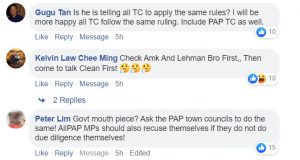 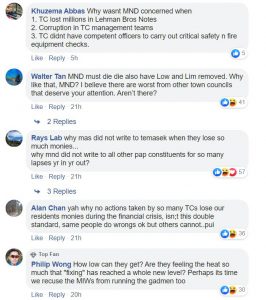 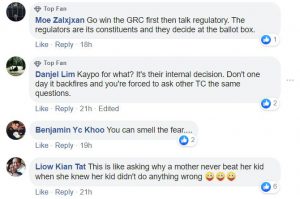