Inspiring netizens with his devotion

Singapore—Photos that show a delivery rider praying on his mat, with his mask still on, by the roadside have gone viral, with netizens moved by the display of his devotion at this time.

The photos were first shared on the sgjackrabbit Facebook group, a private group for ,Honda CBR bikers.

They were then shared by one member named Izuan Manan on Wednesday evening (May 6), who said that the photos “immediately triggered” him, as it served as a reminder to look up to a Higher Power.

Mr Manan wrote, “That our fortune, health, sustenance is fated by him and only him.

Even if orders booming, stack orders, take 5-10mins to solat (pray) like this gentlemen right here. I don’t know whom you are, but you definitely touch my heart and soul, reminded me that we need him.

Kita solat tak solat kita yang rugi.” (We have not lost our prayers.)

He then blessed the delivery rider, and spoke blessings on his Muslim friends and riders.

Muslims usually pray in mosques, which are closed at this time until further notice.

During this time when the country is under circuit breaker restrictions, many may pray at home. But for those who are continuing to work, especially delivery riders who are have become a vital part of life amid our restricted movements, they may not have the same amount of time to keep up with prayers.

The fact that this rider did served as an inspiration, as many commenters wrote. 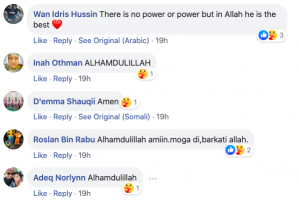 Some commented on how much respect they have for him Others sent blessings to the young man

Another example of an inspiration during this time is that of a young student, Ruzaini Syazwan, who has been delivering meals to the needy before dawn ever since Ramadan started.

Others have donated to this worthy cause, but it is Mr Ruzaini himself who collects these donations, buys what is needed, and then distributes them to the less fortunate—while most Singaporeans are in bed, asleep. -/TISG

Read also:“Sahur Hero” goes out at 2am to give food to those in need