Singapore—One woman took to social media to claim bystanders did nothing to help a Grabfood delivery rider lying unconscious on the ground.

After quickly checking on the man, she called an ambulance herself so that the rider could receive proper medical attention.

Based on the photos she posted, fortunately, the rider revived and was seen sitting up while being attended to by a paramedic.

The woman’s post has either been taken down or its settings have been changed to private, but mustsharenews shared the photos from her post as well as her caption on its site on Sunday (Feb 28). 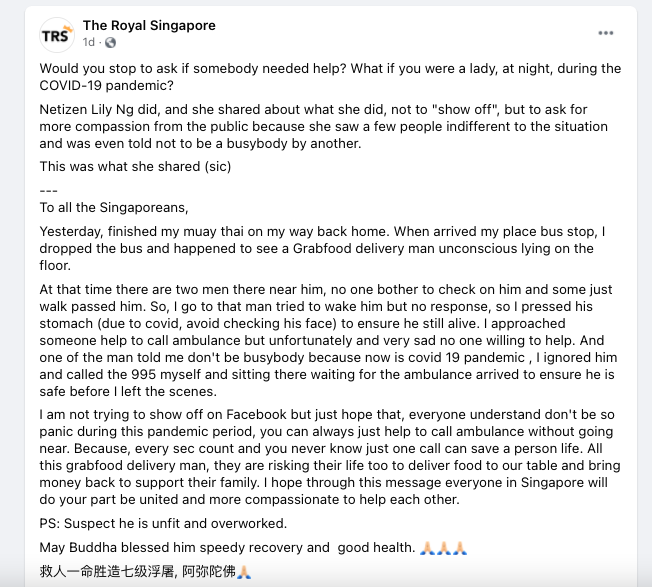 The photos show a man in a green Grabfood delivery rider shirt lying on the ground and being assisted by paramedics.

The woman wrote that she was on her way home from muay thai the previous day when, alighting from the bus, she saw the Grabfood delivery rider unconscious on the ground.

There were a few other people near him, but to her surprise, no one bothered to check on him, and some just walked past him, she wrote.

Alarmed at the man’s state, she herself decided to check on him and tried to wake him, but got no response.

Because of the current Covid pandemic, she needed to avoid his facial area, and therefore she pressed him on the stomach to ensure he was “still alive.”

She then approached others for help, “but unfortunately and very sad no one willing to help.”

Moreover, one bystander told her not to be a busybody “because now is Covid- 19 pandemic.”

However, she paid no heed to the advice and called 995.

The woman then waited for the ambulance to arrive to make sure the man was okay.

She wrote, “I am not trying to show off on Facebook.”

Instead, she said that people should not panic when people are in need of help, despite the pandemic.

“You can always just call an ambulance without going near. Because every sec count and you never know just one call can save a person life (sic).”

The Royal Singapore FB page added that the woman “followed up in a comment on her post to update that the delivery rider’s blood pressure was taken (by) the paramedics and reported to be very low”.