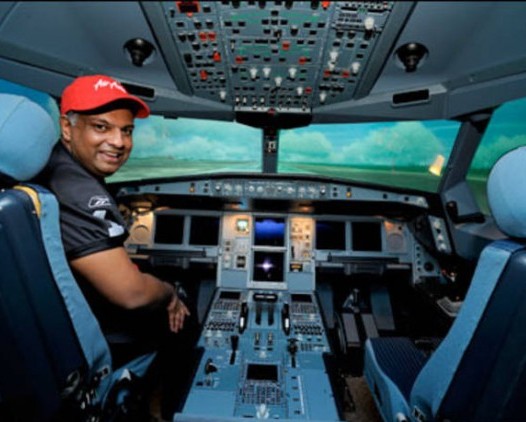 THERE’S a short clip circulating over social media showing an airline’s top boss carrying a portable bin and collecting the spoils from passengers, with a surprised flight stewardess looking on in admiration.

Only AirAsia’s Tony Fernandes dares to be different in the skies.

He has a philosophy that his budget airline has to always put bums in seats and that’s why Air Asia is the soaring talk of town. And he’s never afraid to get his hands dirty!

Fernandes’s long-term vision is to be Asia’s biggest low-cost carrier and he makes no bones that it’s a dog-eat-dog business with absolutely no room for complacency.

“We are certainly now Asia’s largest discount carrier. We stretch from India to Japan and we’re the only airline that has the breadth of coverage,” says the 53-year-old Chief Executive Officer, globally famous for co-founding AirAsia, which has grown the ailing Malaysia-based domestic carrier into Asia’s largest airline group with operations in five countries.

“We’re in the domestic market in India, we are in five other domestic markets, we’re very deep into China. So I’d say our vision is maybe 30 per cent to 40 per cent of where we can eventually be.”

He’s the founder of Tune Air Sdn. Bhd., who introduced the first budget no-frills airline to Malaysians with the tagline”  “Now everyone can fly”. His low-fare success story is so public in Asia that it continues to inspire tremendous competition, which he heartily welcomes.

And he admits he learnt the ropes the hard way, from a “painful bottom” but that’s the pragmatic way to move up the international budget-airline ladder.

“Lion (Air) kicks our ass in Indonesia, and we’ve gotten better and learned. I think, Cebu (Air) does a good job in the Philippines. No one is able to do what we’ve managed, which is build a pan-Asian model, but that will come surely. My idea wasn’t a new idea. I learned it from (Southwest Airlines founder) Herb Kelleher, (Ryanair CEO) Michael O’Leary, and Stelios (Haji-Ioannou, EasyJet’s founder). So no one is exclusive to any ideas,” he says.

He recollects his teenager years in Kuala Lumpur: “I wanted to own an airline. I said that to my father. He said: ‘You make it past the doorman at the Hilton Hotel, I will be pleased.’ Those were the exact words. I still remember that!”

Straight to the nuts and bolts of the airline business, he says: “The biggest issue remains airline ownership restrictions. We want Asean to become a single market so we should start behaving like one, and we’re getting there slowly with Asean Open Skies finally becoming a reality.

“But I don’t think the idea of national carriers is still relevant, and we certainly don’t need 10 of them. We should allow Asean airlines to own each other so we can raise more investment and make better use of capital.”

For the moment, he calls th

“A leader needs to know when to step down. Sometimes, people overstay because they like the attention. I don’t need my ego massaged. At the moment, I think I’m still effective but the time will come to go,” he says, revealing that he already has a successor in mind.

Who? He did not say.

That’s the bewildering spirit of ‘Mr Air Asia’, who never fails to surprise, even with a waste-paper bin at hand, to collect the spoils in conjunction with World Cabin Crew Day.