“Same playbook - he was dangling ‘more than a million dollars’ as bait. If it looks too good to be true, it definitely is!,” said Amrin Amin

Singapore—On Tuesday night, December 17, Senior Parliamentary Secretary Amrin Amin took to social media to show that no one is exempt from becoming the target of a scam.

On Facebook, Mr Amin posted screenshots of messages he had received on Instagram from a ‘Malaysian banker.’ He wrote, “Same playbook – he was dangling ‘more than a million dollars’ as bait. If it looks too good to be true, it definitely is!”

An Instagram user with the name of @zafrul778 reached out to Mr Amin, writing, “Good morning, sir. I am Tengku Zafrul from Malaysia.”

He sent another message introducing himself, writing, “I am Tengku Zafrul, chatting from Malaysia I work with Climb Group.”

‘Zafrul’ replied, “I’d like to brief you a little about an important content you should know of its worth beneficial (sic) and am sorry if am being straight forward cause I need to make you understand something to know if you are interested.”

Mr Amin wrote, “What is it about?”

‘Zafrul’ went on to say he had a business proposal “worth a large amount,” whose value, he wrote, was more than $1,000,000.00. He also promised to send all the pertinent information and asked for Mr Amin’s email.

Obviously on to the fact that it was an attempted scam, Mr Amin wrote, “Why don’t you send email to zafrul_nigerian_scam@idiot.com?”

The would be-scammer was pretending to be Zafrul Aziz, an important figure in global Islamic finance, since he is the Group Chief Executive Officer/Executive Director of CIMB Group Holdings Berhad. The scammer even used a photo of Mr Zafrul, who is actually on Instagram as @zafrulaziz. 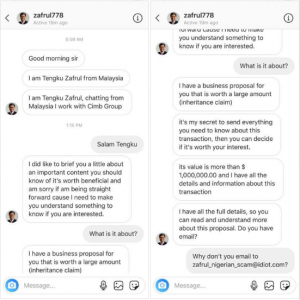 Unwitting and unsuspecting netizens could possibly have been deceived by the scammer.

Mr Amin wrote that there have been 3,591 cases of people scammed in Singapore, and in the first six months of the year S$83.1 million in total was lost due to these scams. One person alone lost S$4.3 million, the largest amount stolen from an individual.

Netizens commenting on Mr Amin’s post wrote in to say how much they appreciated the email address he used in answering the would-be scammer. One netizen wrote in to remind everyone to check their security settings.

It can happen to anyone. Yes anyone is a potential scam target. I experienced that first-hand today.

I got an Instagram message from a ‘Malaysian banker.’ Same playbook – he was dangling ‘more than a million dollars’ as bait. If it looks too good to be true, it definitely is!

Beware of scammers. 3,591 cases in Singapore and $83.1 million in total losses from Jan-Jun this year alone. $4.3 million is the largest amount cheated in one investment scam case!

Be wise! Don’t fall for scams!