Maids face discrimination even in trains? Unfortunately, there are times when domestic workers become the target of discrimination by those in society who seem to feel that they should not enjoy the same rights as Singaporean citizens.

There are around 250,000 foreign domestic workers in the country mostly from the Philippines and Indonesia. And while they are earning better salaries than they would back home, this does not make up for the fact that they are seen, or worse yet, treated as inferior by others.

On Thusrday, August 23, one helper by the name of Tira Dora took to the Facebook page of FDW in Singapore (working conditions forum), a public group whose tagline is “Know your rights and perform your duties,” to recount her experience of discrimination on the train the day before. She wrote, “Yesterday inside the train with my boss..some helpers are off day taking seats in the train..a woman about early 40’s boarded and no vacant seat for her to take…heard her talked to her husband..’now we have to stand up coz these maids are on the seats than us!’”

In her post she asks, “What’s wrong with maids taking seats in public vehicles if they have boarded first? we pay for our fare right? not unless its a PWD pregnant or senior citizen then we are obliged to give up our seats for them..but she is not!”

You can feel her outrage in her words, but her post ended on a sad note. “Sometimes really feels bad to be a maid …discriminated ????”

Many members of the group responded to Ms. Dora’s post. Some have said that they prefer taking the bus to the train, presumably to avoid such incidents. Others refuse to take the train, recalling one social media post wherein the photo of a maid who was asleep on a train was shown, and many wrote harsh comments about her. Another commented said she regularly gives up their seats for locals, which makes them feel good. She was answered by another netizen who reminded her that while compassionate nature was admirable, she has every right to occupy a public transport seat. Other commenter also reminded the domestic workers of their dignity and rights. 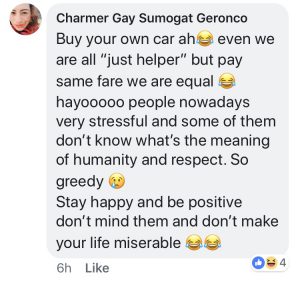