Imagine if, in a puff of smoke, the yellow DSA box disappeared and in its place stood a super-fancy box for the comfort of smokers and non-smokers alike? 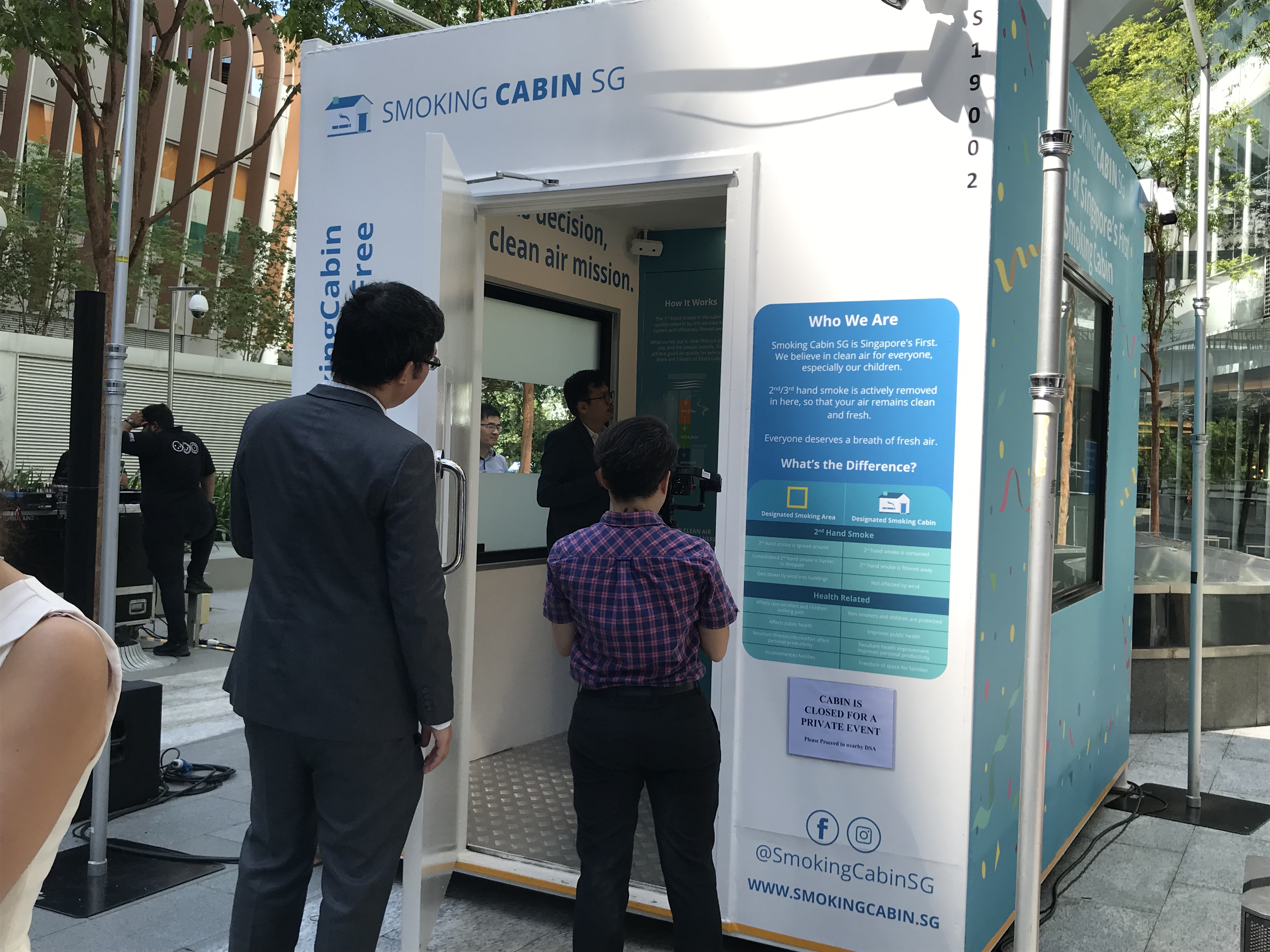 SINGAPORE- Smoking is a a long term problem that won’t be eradicated anytime soon. However, one can now be less wary of the detriments of smoking as Singapore’s first smoking cabin has been developed, solving the issue of second-hand cigarette smoke in Singapore.

On Tuesday, May 21, Singapore’s first ever smoking cabin was officially launched. Marketed under the brand Smoking Cabin SG, it has been developed by Southern Globe Corporation (SGC) director Mr Stefen Choo who graced the event with his explanation of the idea.

Located outside Fusionopolis (a few minutes’ walk from One North MRT station), the innovative cabin seeks to create healthier air in Singapore by eliminating the presence of second-hand cigarette smoke.

It has a three-layer filtration system manufactured by Danish company Smoke Solution and used in Dubai, Japan, Kuwait and Denmark.

The first layer is the “Pre Filter” which removes large dust particles. The second layer is the “HEPA Filter” which removes minute 0.3 micron particles much like a N95 mask does. The third layer of the “Activated Carbon Filter” removes tobacco smells and chemicals. This comprehensive filter system thus purifies polluted air brought about by pernicious cigarette smoke.

In terms of energy efficiency, the filtration system is activated by automatic motion sensors. This means that the cabin will only be in use when someone enters it.

This is how the inside of the cabin looks like.

With a size of 52 sqft, the Smoking Cabin is able to accommodate up to 10 people.

Detractors might debunk the effectiveness of such a cabin, arguing that it would be too hot and stuffy for smokers. Contrary to this belief, the air-conditioned cabin actually offers basic comfort and convenience to smokers as no snuffing of cigarette buds is needed after a smoking session.

Smokers can simply throw their lit cigarettes into the fireproof ash bin that has zero oxygen. The lit cigarette will then be distinguished halfway down the bin.

Furthermore, even after smokers have left the room, the air filter will continue to filter the air for 15 minutes. This ensures that fresh air will be emitted continuously, preventing second-hand smoke from reaching the passers-by.

Mr Choo shared that since the launch of the prototype cabin ten days ago, there have been approximately 100 smokers using the cabin per day and 1150 cigarette buds have since been collected. This implies a certain level of acceptance for the cabin.

Currently, one such cabin costs $20,000, excluding the maintenance and electricity costs. According to Mr Choo, the monthly electricity and maintenance costs per cabin are about $200 and $1500, respectively.

When asked about Mr Choo’s business goals, he said that there are plans to launch a mobile version of the smoking cabin to cater for the country’s many public events such as the National Day Parade and Marina Bay-based events.

There have also been ongoing purchasing talks with government agencies and shopping malls regarding the cabin but none off these have yet resulted in orders.

The launch of Smoking Cabin SG is actually a new income stream for Mr Choo as he is involved in the aviation business. He explained that since his aviation business is now able to function independently, he is able to work on the idea of creating a Singapore free of second-hand cigarette smoke.

However, the driving force behind this project is the dire consequences of second-hand smoke.

He shared that he had been in Indonesia when he came across a travel exhibition with glass cabins designated for smokers and designed by Smoke Solutions.

This gave rise to the idea of Smoking Cabin SG, which Mr Choo alleges to remove 99.95 percent of cigarette smoke.

He went on to highlight that this is a “good technology that Singapore must have” and that it “captures the problem at its source”.

Essentially, the issue of second-hand smoke is close to his heart due to his personal experience with it: his neighbour’s smoking habit has caused concerns for his family’s health.

In his speech, he said,“the battle of second hand smoke will be a long term problem” and “a problem that exists everywhere in Singapore”.

True to that, statistics have shown the dangerous effects of smoking and second-hand smoke where 166 people out of every 1000 people in Singapore have suffered from tobacco-related diseases.

While there are existing solution efforts through government initiatives such as the outlining of “Designated Smoking Areas” (DSAs), Mr Choo felt that these measures are inadequate as they’re not all-encompassing.

For instance, DSAs are non-sheltered which just defeats it purpose as the public is still exposed to second hand smoke. Singapore’s tropical weather also means that frequent rains result in smokers having to leave the DSAs and move nearer enclosed areas such as entrances of shopping malls.

To address these gaps, Mr Choo finds it critical to develop a long-term solution.

However, in spite of his strong desire to better deal with the problem, Mr Choo explains,” I don’t hate smokers. A lot of my good friends are smokers.”

When asked about the future challenges, Mr Choo said that there would definitely be some but as of yet, he cannot foresee any.

As for how he will promote this smoking cabin, it is said that Mr Choo is reaching out to shopping malls and conducting discussions on the implementation of them at various sites in Singapore. While talks are still ongoing, it is possible for the smoking cabins to work on a rental basis, meaning that they can be rented by organisers for various events.

60 smoking cabins will also be deployed all around the island this year, while there will be another 60 more next year. The one at Fusionopolis will be permanent and on site for one year.