The Independent News
Home News Featured News ESM Goh reflects on how he became PM 30 years ago after...

Emeritus Senior Minister Goh Chok Tong was hospitalised for a second surgery to remove kidney stones over the weekend – just one week after he underwent laser surgery to have a sizeable kidney stone blasted. His stay at the hospital coincided with the 30th anniversary of his inauguration as Singapore’s second Prime Minister.

In July 2003, Goh surprised Singaporeans by announcing that his government was openly employing homosexuals, even in sensitive jobs, despite homosexual acts remaining illegal under Section 377A of the Penal Code. His announcement reinforced his image as an open-minded leader.

Singapore experienced several crises during the period under Mr Goh’s administration, such as the 1997 Asian financial crisis, threats of terrorism including the 2001 Singapore embassies attack plot by Jemaah Islamiyah, the 2001–2003 economic recession, and the 2003 SARS outbreak.

As Secretary-General of the PAP, Mr Goh led the ruling party to three general election victories in 1991, 1997, and 2001, in which the party won 61%, 65% and 75% of the votes respectively. After the 2001 general election, Goh indicated that he would step down as Prime Minister after leading the country out of the recession.

He kept to his word and handed the reins of the Government over to Lee Kuan Yew’s eldest son, Lee Hsien Loong, on 12 August 2004.

After stepping down as PM, Mr Goh served as Senior Minister until May 2011 when he and Mr Lee Kuan Yew decided to leave the Cabinet after the watershed 2011 election. Mr Goh was then given the honorary title of “Emeritus Senior Minister”.

Although Mr Goh’s predecessor remained an MP until his death at the age of 91, Mr Goh retired from electoral politics ahead of the 2020 general election at the age of 79.

Amid rumours that he was phased out of politics by PAP leaders, Mr Goh said that he is retiring “with a heavy heart” since he believed would not have the same energy he used to have in serving the people when he crosses into his 80s.

Right after the election, Mr Goh suggested that it was a health scare that triggered his retirement even though he initially told current PM Lee Hsien Loong that he would prefer to step down from electoral politics “whilst [he was] healthy” and shared that he had a cancer scare sometime last year when his doctor discovered a white spot on his voice box.

By July, the white spot had disappeared and Mr Goh said that while it is “too late to reverse” his decision to retire, it was “fortunate” that he stepped down.

Mr Goh has been more forthcoming about his health on social media since he retired. Last Sunday (22 Nov), he shared online that he had been discharged earlier that day after he was warded at Singapore General Hospital (SGH) to have a fairly large kidney stone removed.

Revealing that he only suffered mild nausea after waking up from the general anesthesia he was administered and discomfort from being catheterised, Mr Goh said that he is scheduled to see the doctor for a follow-up in a few days.

On Saturday (28 Nov), Mr Goh revealed that he was in the hospital waiting to be discharged after another procedure to remove all the fragments of the kidney stone that was pulverised in his last surgery. He was put under general anesthesia during this latest procedure as well.

While he was at the hospital, Mr Goh reflected on how he was sworn in as Prime Minister three decades ago. Sharing a photo of himself from his inauguration ceremony, he wrote on social media:

“What a difference 30 years make. I was sworn in as PM this day 3 decades ago. Now in hospital waiting to be discharged after procedure to remove all fragments of kidney stone from last week’s blast. I am fine. Thank you all for your concern and well-wishes.” 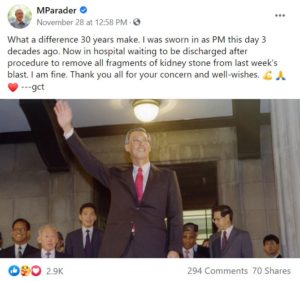