Home News Featured News Will the kopitiam reign supreme with Costa Coffee and other cafes closing...

Will the kopitiam reign supreme with Costa Coffee and other cafes closing down?

Singapore has just said goodbye to Costa Coffee, which will have closed all eight outlets in the country by the middle of the month. St. Marc Cafe, a Japanese coffee chain, is now only operating two of its four outlets.

While the closures of Costa Coffee and St. Marc Cafe is attributed to rising rent prices all over the country, perhaps there is something deeper at the root. If Singapore is indeed the “coffee capital of South East Asia” why are there coffee chains failing? And what part of the country’s coffee culture will be truly lasting?

Singapore has a history of a thriving coffee culture, from kopitiam days, to the rise of Starbucks, and other coffee chains, to the so-called “third wave” single origin or blended, specialty coffee.

The coffee at kopitiams (or coffeeshops in Hokkien) has a distinct taste due to its high caffeine- Robusta beans roasted in butter and sugar, then strained through a “sock” (a cloth infuser) and mixed with condensed milk. While kopitiams come in all shapes and sizes, the most traditional of all are your rather basic neighborhood joints. As an institution, the kopitiam culture is here to stay.

Next, let’s take Starbucks as an example of the second type of coffee shops in the country. Starbucks in Singapore, which started in 1996, is like Starbucks everywhere else around the world, where the brand has more value than practically anything else. People go for the ambience, the music, the convenience and other aspects that one can expect from Starbucks, but not necessarily a cup of extraordinarily good coffee.

Costa Coffee, which is the second biggest coffee chain in the world right after Starbucks, appeals to much of the same crowd of people who regularly visit the global chain. Japan’s St. Marc Cafe is primarily a dessert cafe—with not just coffee but baked goods featured prominently on the menu. There’s no mystery or anything unexpected when you order from places like Starbucks, Costa Coffee or St. Marc’s, you get the same kind and quality of food and drinks every time you go.

Third-wave coffee shops are all about the taste of coffee, based on where the beans are grown and how the coffee itself is prepared. You can have single origin coffee from a specific region or even farm from, say, Peru, Guatemala, Kenya or Colombia.

For third-wave coffee aficionados, it’s all about the craft of coffee making, from the beans, to the harvesting, to the roasting, the pouring over, everything that give rise to each coffee’s unique taste—or the whole third wave coffee experience, so to speak.

Ironically enough, just four short years ago Costa Coffee called South East Asia their “missing fourth leg” to go along with their thriving coffee shops in Europe, China and India. Back in 2014, Costa Coffee had announced that they were expecting to open five to ten new coffee shops just in Singapore every year, something that obviously did not happen.

News broke last week that F & B industry giant Coca-cola is buying Costa Coffee from its parent company in a US$5.1 billion (S$7 billion) deal. However, the coffee chain’s local employees had been told of the closures since February of this year.

But Starbucks remains a big player in the coffee market, with 140 stores nationwide employing 2,600 baristas.

While one theory exists that the second wave coffee shops are failing as people prefer third wave coffee shops, neither are these “indie” coffee shops safe. The coffee shops mentioned above can be considered as survivors, since nearly half of the 369 coffee shops that opened in 2011 have shut down. But this type of coffee shop retains a great appeal to younger, Internet savvy-people, as well as those who find that big coffee chains generally over-roast their coffee beans, resulting in a burnt taste.

Perhaps the last man standing in Singapore’s coffee culture remains to be seen over the next few years.

Netizens responded to the news of Costa Coffee closing saying that the problem is with the taste of the coffee. 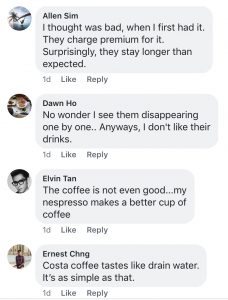 Others believe that even Starbucks is on its way out, due to hard times 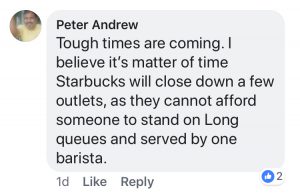 Still others expressed that they prefer kopitiam 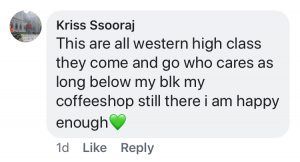