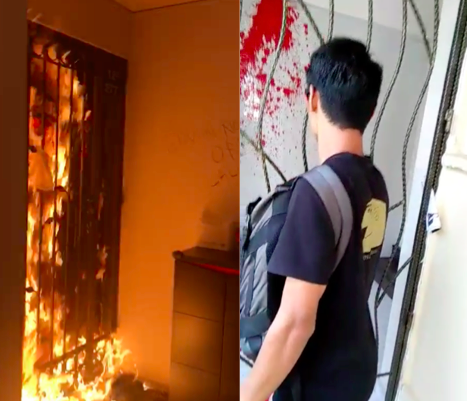 Two graphic videos of a loanshark runner made their way round Whatsapp Messenger on Monday (Oct 26) evening.

While it is unclear when the videos were taken, they showed a loanshark runner performing illegal activities such as throwing paint on a house, and setting another unit on fire.

In the first video, a man clad in black and wearing sunglasses can be seen splashing a bottle of red paint all over the front of a fourth-storey HDB unit.

The second video circulating starts off by showing a message written on the wall outside a 12th storey HDB flat.

The loanshark runner then proceeded to light a white cloth tied to the gate on fire. Not only was the cloth extremely flammable, it appeared that the front of the door and floor in front of the house was doused in a flammable liquid as well.

In August this year, the police arrested 160 men and 77 women, aged between 13 and 77 years old, for their suspected involvement in loansharking activities in an operation that took place between July 20 and 30, 2020.

Officers from the Criminal Investigation Department and the seven police land divisions conducted simultaneous raids at multiple locations island-wide resulting in the arrests.

51 suspects are believed to be runners who assisted loansharks by carrying out ATM transfers.

Another 12 are believed to have carried out acts of harassment by splashing paint and scrawling loanshark-related graffiti on walls.

The remaining 174 suspects are believed to have opened bank accounts and given away their ATM cards and Personal Identification Numbers to facilitate unlicensed moneylending business.

First-time offenders found guilty of acting on behalf of an unlicensed moneylender, committing or attempting to commit any acts of harassment will be punished with imprisonment for a term of up to five years, a fine of between S$5,000 and S$50,000, and shall also be liable to caning of between three and six strokes. /TISGFollow us on Social Media