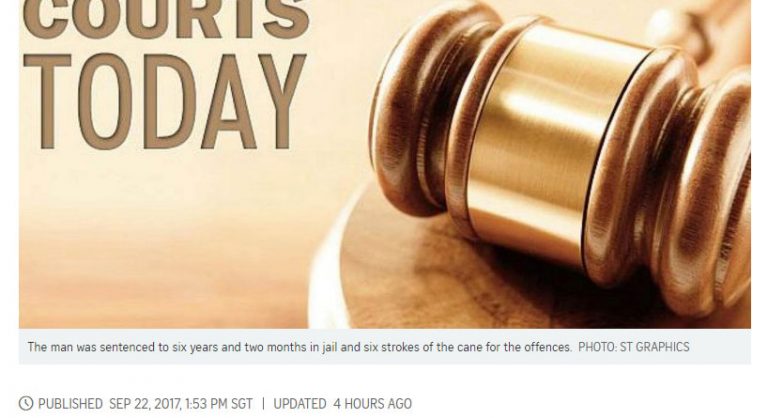 The Straits Times appears to have violated a court-decreed gag order imposed to protect the identity of a victim whose nude photo was released online by the accused in a crime of passion court case.

The case involves a 25-year-old cook who posted a naked photograph of his 18-year-old ex-girlfriend and a video of her undressing on her Facebook page, after locking her out of her own Facebook and Gmail accounts. The cook was also charged with causing harm to a police officer after he slashed the bicep of an inspector who had come to arrest him after his ex-girlfriend made a police complaint against him.

These crimes occurred in March 2016. The inspector suffered an 8cm long laceration when the accused used a concealed bread knife to slash him and reportedly still suffers occasional pain in his right arm when carrying heaving objects.

District Judge Hamidah Ibrahim sentenced the accused to six years and two months in jail and six strokes of the cane this Friday, after he pleaded guilty to nine charges: causing grievous hurt to a police inspector; consuming and having drugs; four counts of cheating; and two counts of computer misuse.

The judge also ordered that the convicted cook and his victim cannot be named so as to protect the young girl’s identity.

The Straits Times appears to have violated this order when its report online featured the name of the cook in the caption of the header photo:

The name of the convicted cook was up for at least 24 hours before it was taken down yesterday afternoon. Ironically, the publication even featured news of the gag order in the third paragraph of its report on the case:

The name of the cook can still be seen in a cached version of the original report via a simple Google search.

The Attorney-General’s Chambers has yet to comment on whether this is an actionable violation of the gag order.Follow us on Social Media