Home News Singapore journalism: Is it time to liberalise the news media?

Singapore journalism: Is it time to liberalise the news media? 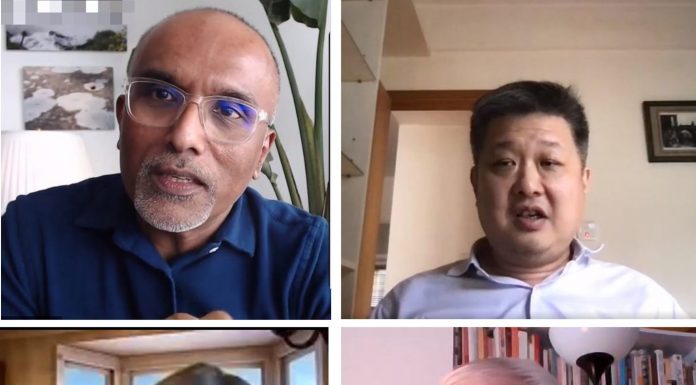 Cherian George: Not enough people are willing to pay for public-interest journalism

Singapore — Future of Singapore (FOSG) hosted a roundtable conversation on the news media on May 22.

The dialogue was hosted on Zoom and had six speakers present: Prof Cherian George, a professor of Media at the Hong Kong Baptist University; Mr PN Balji, a veteran of the Singapore media landscape; Mr Toh Han Shih from South China Morning Post (SCMP); Ms Kirsten Han, a freelance journalist, and Mr Terry Xu, who is part of an independent media outlet. It was moderated by architect Tay Kheng Soon, an adjunct professor at the National University of Singapore.

Prof Cherian George identified three issues faced by the national newspaper, The Straits Times, and its owner, SPH: Market failure, political control, and poor management.
He noted public-interest journalism by itself is not something that enough people are willing to pay for. He added that “the PAP Government’s chokehold on public discourse prevents Singapore journalism from rising to its potential”. In addition, he commented on how SPH might have been suffering from a “leadership crisis”, with CEOs who have zero media experience.
“I think it is reasonable to demand that SPH not shut out alternative views the way it does now, even if we concede that SPH titles need to gravitate towards the mean, it is reasonable to expect it to allow for more standard deviation,” he said, using a statistical metaphor to describe the political arena. He understood the need for the company to broadly align itself with the Government agenda. However, he suggested that it could still provide a platform for contrarian views.
Mr Toh Han Shih noted the “contrast in press freedom between Singapore and Hong Kong.”
At the SCMP, he had been given the liberty to write about a free-trade agreement between Hong Kong and mainland China, and was even asked by the editor to point out the problems the agreement had. In contrast, when he asked a Singapore lawyer if he would be allowed to write a similar article, the lawyer sarcastically replied, ‘You can, on Talking C*ck’, a satirical Singaporean website that has ceased operation since 2010.
He says that the best way to express the difference in press freedom is through the cities’ leaders.
In October 2019, the Hong Kong Chief Executive Carrie Lam said, “Freedom of speech is a core value of Hong Kong, and I completely agree that the media has a role as the ‘fourth estate’ in monitoring the government.”
The late Lee Kuan Yew in his address to the American Society of Newspaper Editors in Washington DC in April 1988, on the other hand, said, “One value which does not fit Singapore is the theory that the press is the Fourth Estate. And in Singapore’s experience, because of our volatile racial and religious mix, the American concept of the “marketplace of ideas”, instead of producing harmonious enlightenment, has from time and time led to riots and bloodshed.”
Mr Toh also noted that in the Press Freedom Index, Hong Kong ranked marginally higher at 80, while Singapore ranked 160 out of 180 countries.
Freelancer Kirsten Han gave her opinion on the media scene in Singapore. She said that “it’s actually very difficult to get information”.
Rounding off the conversation, Prof Cherian George said that “it does not seem that Singaporeans are bothered enough to put their money where the mouth is and support independent online media”.
Mr Tay concluded the session by saying, “The culture of fear has to abate. Otherwise, we are not going to be able to move forward.”
He said that journalist accreditation should be more liberal than selective. He added that the financing of media also needed to be more viable.
“Without opening the Singaporean mind, the creative spirit of Singaporeans will not be flowering, and this is not to the benefit of Singapore,” Mr Tay warned.
Denise Teh is an intern at The Independent SG. /TISG