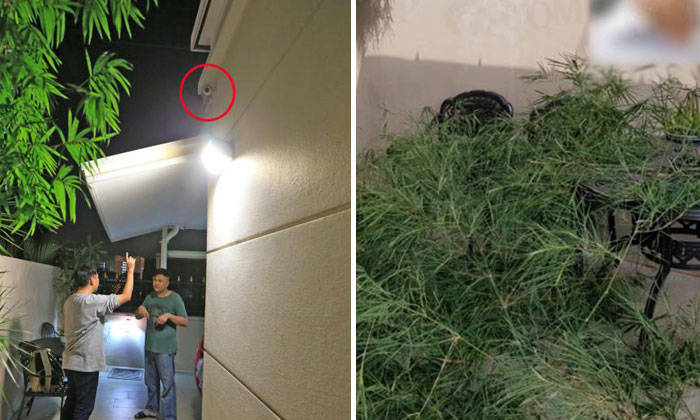 A pair of neighbours living in the Sembawang Springs estate has been feuding ever since one family decided to install surveillance cameras around their home last year.

According to the Chinese daily, the family that installed the cameras – the Lim family, who had been living in the area for over 15 years – run many businesses, including the sale of valuable items like jewellery and gold.

Because of this, insurance companies required them to install the CCTV cameras in their premises.

This irked their neighbour, Mr Chen, who has accused the Lims of infringing on his and his family’s privacy.

Eden Lim, one of the members of the Lim household, told reporters:

“My neighbour served me three lawyer’s letters in September 2016. They accused us of pointing the CCTV at their pool and violating their privacy.

“We then made an adjustment and planted some bamboo plants to block the view, but they were still unhappy.”

Last month, on 10 Oct, the Lims discovered that many of the bamboo plants had been severed and the leaves were strewn about on their compound. Concerned, the Lims called the police. Eden said:

“This has never happened before. It is not a serious issue, and I don’t mind them cutting the plants. However, they threw the leaves back. What if they had hit my family members?”

Eden also revealed that Mr Chen and his family have taken to filming the customers who visit the Lim residence to collect goods. He has noticed that the Chen family has taken to taking videos of transactions inside the Lim home, as well. This has prompted them to again call the police.

Mr Chen, however, denied ever taking videos of the Lim residence and claimed that it is his family’s safety that is being affected.

On the issue of the bamboo plants, Mr Chen alleged that his family was irritated by the leaves that fell from the plants into his swimming pool:

“Since they weren’t going to do anything about it, we decided to help them trim the plants and return the parts to them.”