Netizens to Josephine Teo, who called minimum wage unfeasible, ‘What about ministers’ salaries?’

Speaking at a panel discussion during the 30th anniversary of the Institute of Policy Studies 30th Anniversary conference at Marina Bay Sands last Friday, October 26, the Minister of Manpower said that implementing minimum wage would be too financially burdensome on employers and may lead to higher unemployment as well as low wage earners resorting to illegal employment.

Netizens, however, seemed to sense hypocrisy in Josephine Teo’s remarks, questioning why the government could afford ministers’ high salaries, but not minimum wage.

Ms. Teo said that in order to enforce minimum wage, employers would have to pay more for certain kinds of labor, effectively implementing a tax on employment that would affect low wage earners the most.

Ms. Teo said, “Not all employers would want to employ workers at this rate, which could lead to lower levels of employment. To secure a job, some workers may even choose to work illegally below the minimum wage, which makes them even more vulnerable.”

Read related: Inequality is a “problem of success” that is “very difficult to overcome”: Manpower Minister Josephine Teo

The Minister argued that what the government has done is to provide supplementary income through the WIS (Workfare Income Supplement Scheme), a part of Singapore’s social security system, which encourages workers who earn low pay to keep on getting regular work by supplementing their income.

Workers who qualify for WIS end up getting 60 percent of their WIS in the form of CPF top-ups so that their retirement savings accumulate, with the other 40 percent given to help with daily needs. Ms. Teo argued that supplemental payments from WIS can go as high as 30 percent of one’s monthly salary, which benefits recipients in the same way as minimum wage would, with one difference.

“But there’s a crucial difference – the cost of WIS is borne by the government, with no risk of inducing unemployment or illegal employment of such workers,” she explained. “Minimum wage, on the other hand, will be borne by the employers.”

The Minister of Manpower also says she believed that the better answer is in seeing to it that wages grow sustainably, through processes such as the Progressive Wage Model (PWM), created by tripartite partners

“Unlike minimum wage which specifies a floor, PWM specifies a ladder. In fact, there are four inter-linked ladders for skills, jobs, productivity, and wages. A worker can be paid a higher wage on the basis of his improved skills, enlarged job or heightened productivity,” Ms. Teo explained. “The rungs of the ladder provide an upward path, so the worker is not stuck earning minimum wages.”

Ambassador-at-large Tommy Koh responded to Ms. Teo by talking about how when the minimum wage was implemented in places such as
Japan, South Korea, and Hong Kong, it allowed people to “live in dignity” and helped many of them to be lifted up out of poverty. In these economies, Mr. Koh argued, there was little unemployment and no illegal employment.

Ms. Teo answered Mr. Koh with a story about how one security guard in Hong Kong had to retire in Southern China, to better afford the cost of living there. She said, “To what extent is he living his retirement years in dignity?”

Mr. Koh also quoted the late Prime Minister Lee Kwan Yew. “Mr. Lee said, ‘I want to build a Singapore which resembles an olive — very few very rich, very poor people, and a very large middle income.’ I recently plotted the income profile of Singapore. It does not look like an olive. It looks like a pear — a large number of people at the bottom. How did the olive become a pear? And if the pear is not what we want, what can we do about it?”

He was answered by nominated MP Walter Theseira, another panel member that night.

“With any straight taxation or redistribution policies, you can take any arbitrary pear-shape income distribution and massage it into an olive. The question we have to ask is that after the massaging is done, do you end up with a lot less fruit than what you started off with?”

On her part, Ms. Teo said, that one necessary thing is for Singaporeans to renew their mindset into believing that economic worth is not equal to moral worth.

“We must be able to look each other in the eye and look past the markers of social success. Treat each other with respect and consideration.”

Netizens were none too happy about Ms. Teo’s remarks, especially with Singapore’s ministers getting salaries that are far above minimum wage, with some calling her remarks “ironic.” 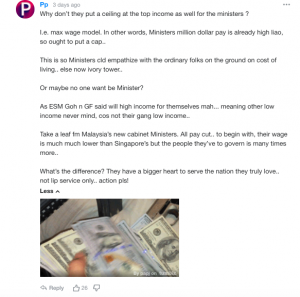 Others insisted that minimum wage would be good for the country 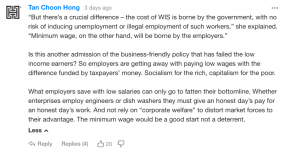 Others questioned if WIS would be enough.