The Independent Singapore News
Home News Netizens say 'no thanks' to music onboard SMRT trains, suggest delays and...

Netizens say ‘no thanks’ to music onboard SMRT trains, suggest delays and faults be looked into instead

Experts have found that music has the ability to reduce stress, which is why in some public areas around the globe music is piped in, including transport stations. Some SMRT stations here in Singapore have adopted this practice, such as  Gaut, Bishan, Ang Mo Kio, and others.

The Straits Times reported on this on Sunday, October 28, emphasizing that this is “part of SMRT’s adoption of the Japanese concept of kaizen, or continuous improvement, to work on its processes and improve commuter experience.”

The music piped in at SMRT stations is courtesy of Express melody. Jerry Chen, the company’s managing director said that the music is supposed to help soothe negative feelings during the stress of a commute, such as a train breakdown. Mr. Chen also said that the music can help shorten the perception of how long commuters wait.

Ang Swee Hoon, an Associate Professor at National University of Singapore Business School, emphasized that music could make commuters move faster rather than loiter around stations. One person interviewed by the paper agreed that music had a calming effect, another one said it did not seem to make that big of a difference.

Netizens, by and large, said, “thanks, but no thanks,” preferring instead that more important issues such as overcrowding, train frequency and breakdowns be addressed instead.

One commenter stressed that “providing reliable transportation” is the most important job of SMRT’s management.

Yet others complained about the music played

Others said that while the music was all right, the outdated speaker systems spoiled it

…to different genres for different days of the week.

Yet another commenter suggested that food and drinks be allowed on the train, for consumption during delays.

Many netizens shot this suggestion down 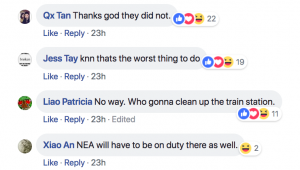 A few decided to be humorous, but pointed, about the matter

Very few people seemed to think it was a good idea

But one netizen said that instead of complaining, Singaporeans should appreciate SMRT stations and trains for being so clean, when compared to other nations.