It is an everyday scene in the busiest city of Japan, Tokyo- where trains are jam-packed with commuters, where people are squeezing in to hop into the coming train hoping to get to their destination on or before time, and where a platform seems to be the waiting area for the next part of life’s activities.

This daily scenario is also a venue for behaviors displayed by people coming from different walks in life. A survey done by the Japanese Private Railway Association to various train companies and more than 2,500 passengers, was released in late December last year. It ranked the behaviors considered the most inconsiderate by the commuters. A number of daily occurrences garnered plenty of votes.

The number 1 in rank seems to be an unexpected one. The way people carry bags occupied the top spot. Passengers also detailed their frustrations on when people wear backpacks and similar items on their back instead of moving them to the front.

Many shared this sentiment as this ranking became viral. In an article on Toyo Keizai Online, people highlighted their annoyance on bags in train commuting. Compared to its ranking in 2009, which got the 12th and up to 3rd in 2017, how bags are carried is such bothersome to many. Speculations were on the number of salarymen using backpacks in recent years and most of them are commuting with trains on their daily routines to work.

In the Facebook page of Japan Times, many netizens commented their opinions on this:

However, some users saw the “bag” issue in a different light especially to students carrying backpacks. They noted that many schools require students to use backpacks and these school kids go to school riding in a train.

Rude boarding and exiting behavior, and playing music through headphones loud enough to bleed out, ranked the fourth and fifth respectively. Some have noted how people try to squeeze in tightly even if the next train comes in 5 minutes.

One Twitter user posted about hearing a mother repeatedly say, “Do not push in, I have a baby” on a crowded train, and yet that didn’t stop more commuters from squeezing in. This led to discussions online about ensuring the safety of children if not cramped trains at rush hour could result in the death of a baby. Having trains with child-care only cars and more flex-time for workers were given as suggestions to avoid this kind of situations.

On the seventh place is being drunk and next to that is applying makeup. While ending the list for top 10 is eating food on the train.

What is interesting to note is the one in the 16th place, that is, reading physical media such as magazines or books, which a handful of netizens reacted to this. They didn’t consider it as an annoyance.

Seats in the priority section may not be one of the top 10 but this spurred a lot of negative reactions from people’s observations when they ride on trains. 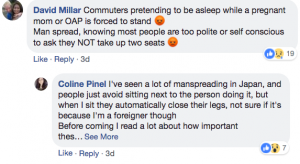 Some netizens took to social media their “stinky”, “smelly” annoyances they have encountered in commuting trains.

This one online user, who somehow has a point, was funny asking why farting is not part of the list:

There were some who saw it in a bigger picture and blamed the country’s infrastructure, which jams too many people into Tokyo and doesn’t adjust for crowded transit. Government approaches to public transportation, work-life balance and urbanization were also part of the online rants regarding this topic where majority and most of the Japanese take part of. 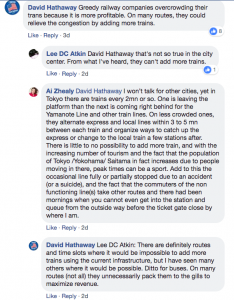 At any rate, according to the online statistic portal Statista, Japanese rated their country’s train services a 6.6 out of 7, where 7 is extremely sufficient.

So, this only shows that even though there are many complaints, they still see the trains on the right track.