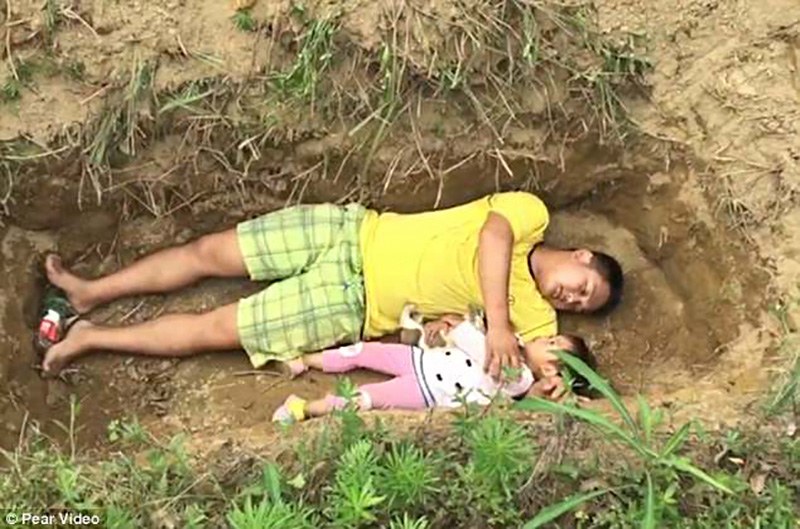 SICHUAN, CHINA – Little Zhang Xinlei was diagnosed with a congenital blood disorder called thalassemia when she was 2 months old. Mr Zhang Li Yong, father of the two-year-old, has depleted his savings for her medical costs.

Mr Zhang draws meagre monthly income of 2500RMB (about $500) as a night shift worker at a glass factory in Neijiang, Sichuan. After spending over $28,000 (140,000 Chinese Yuan) on daughter’s medical treatment, he then resorted to other means, such as borrowing and fundraising.

The couple told the Chinese media, “We have borrowed money from everyone possible, to the extent that nobody is willing to help us anymore.”

In despair, he thought of a way to make the last days of his daughter a little more comfortable – he dug her grave and lay in with her everyday -to make sure she does not feel scared when the time comes.

Disease-stricken Xinlei became ostracised due to her odd condition. She is often seen mumbling to herself or to animals, while playing alone at a sand ground nearby. Sometimes, her father would take her out for net-fishing.

Xinlei’s condition requires blood transfusion every month to sustain life. Often, she falls ill due to low immunity and gets hospitalised for a couple of weeks. Her parents, unfortunately, have unmatched blood type to supply blood.

As a result, the couple were hopeful that a newborn’s cord blood could treat Xin Lei’s condition. However, they realised that the transplant would cost hundred of thousands of Yuan, which is beyond their means.

The family has also appealed for help on a Chinese fundraising website. The last donation took place 2 months ago.