CPF members should not confuse facts with PAP’s propaganda 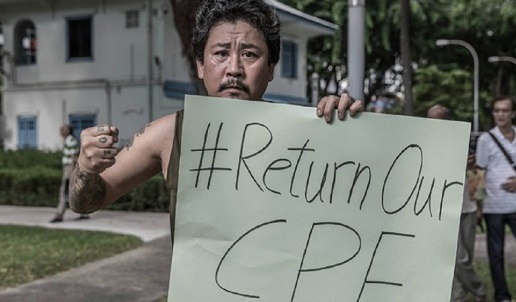 How could any scheme which can suka suka shift its goalposts to another stadium every other year be a good deal?

Joanna: “..CPF system has its share of detractors among Singaporeans but, overseas, it attracts a lot of positive attention”.

But aren’t foreigners only armchair admirers of our system? And if they have been affected by PAP’s shifting goal posts as much as CPF members, won’t they also be detractors?

Joanna said this was a “puzzling fact” as if ST readers, many who could be her Ah Kong or Ah Ma, were born yesterday.

MSM is no longer in a position to, in Chee Soon Juan’s words, “frame the issue, set the parameters”. Being a youth herself, isn’t she aware of the fact that the internet wasn’t born yesterday? Why is she insulting ST readers?

Joanna quoted members of the CPF advisory panel but how objective is that when they are all PAP appointees?

Professor Benedict Koh, a member, was reported to have said foreigners wanted to invest in our CPF. But would the same foreigners, if they were CPF members, agree to CPF rules being continuously tweaked for no rhyme or reason, with the possibility of the withdrawal age increased to 80 and beyond?

CPF members should read up on the CPF issue and not be confused by tons of PAP propaganda.

1 What was the original objective of the CPF scheme?

CPF scheme started in 1955 as a compulsory savings scheme to provide for members’ retirement. Total 10% contribution split equally between employer and employee.

When the majority of Singaporeans did not have the means to retire after 5 decades, PAP realised the CPF scheme was a failure. Instead of addressing the underlying issues, the government sneakily amended CPF’s mission, after 2011, to include self financing of healthcare and housing. With a tougher mission or Mission Impossible, failure might be excusable.

3 Why has the CPF scheme failed?

During the initial years of a member’s career, more than 80% of retirement savings is used to finance housing need or channeled into the Medisave Account. The balance of less than 20% is clearly too little for retirement.

4 What was the highest contribution rate?

Employer contribution rate increased from 5% to 25% in 1984. Likewise for employee.

This was to allow PAP to support its public housing programme and trumpet its high rate of home ownership. Increase construction activities contributed to high GDP growth.

6 Did frequent increases in CPF contribution rates affect the economy?

8 Did this contribute to the issue of retirement shortfall?

Yes. Together with the MA, 84% of retirement savings has been set aside to service 20- to 30-year mortgages and medical needs.

9 Why doesn’t the government address this issue which is really easy to resolve?

Billions in CPF retirement savings have been channeled into housing for at least 4 decades. A drastic reduction would cause a collapse in property prices. Since rent-seeking features prominently in our government, decreasing the value of real estate is not in the interest of a parasitic PAP. That’s why we see all sorts of attempts to maintain high property prices.

10 But isn’t owning a home more important than retirement?

There’s no point owning a home without the ability to enjoy the fruits of one’s labour but one also can’t retire without a home. There is a fine balance between both goals. But should one own a home at the expense of retirement? Are Singaporeans merely economic digits?

11 Is GIC doing a good job investing our CPF?

The problem with GIC is that no one, including almost every MP, really knows where or how our CPF is invested. Intelligent CPF members are somehow too fearful or reluctant to demandtransparency and accountability from GIC. With MSM publishing only information selectively disclosed by GIC, no honest person can state with certainty that GIC has done a good job managing our CPF.

12 Why is GIC unsuitable to manage our CPF?

There is no mention of GIC serving CPF members’ retirement needs at all.

13 But GIC has done very well and that’s why it has grown so big?

Not true. In 1996, CPF balances stood at $72.5 billion. This amount has increased to about $314 billion, mostly through new contributions and not superior returns by GIC. The image of GIC as a superior fund manager is cultivated by PAP controlled MSM.

14 Does GIC need to commingle CPF funds with state reserves?

No. GIC could have managed CPF funds separately. For example, $314 billion (CPF) + $ x billion (Singapore’s foreign reserves) = Total reserves managed by GIC. GIC could still disclose only the CPF portion without publishing the value of total reserves to conceal the total size of our reserves.

15 Why does GIC insist on commingling CPF funds with state reserves?

The obvious reason is to mask its poor performance: our scholars are no Warren Buffet, only book smart. PAP can’t simply parachute some scholars into top positions in the fund management industry and expect superior performance. If scholars were cut out to be fund managers, why bother to become paper generals or helm ministries/ stat boards for more than 2 decades?

16 Is it true that speculators will attack the Singapore dollar during periods of volatility?

Many speculators with deep pockets are extremely intelligent investors, eg George Soros who crashed the British pound, and will never mount an attack on any currency that is fundamentally strong. It’s like banging one’s head against the wall to find out which is harder. Also, would anyone attack an enemy’s weakness or strength?

A currency which could fall after a speculative attack means it is fundamentally weak and would have fallen in due course. Is GIC implying there is some fundamental weakness in our currency? Is there material information withheld from the public?

Singaporeans should be mindful that some statements by GIC is not only ridiculous but self insulting to the point of stupidity.

While admittedly CPF rates are relatively high only recently, it should not be viewed in isolation. This is because CPF members have been shortchanged for decades; CPF Board has been using a flawed formula pegged to short term rates to determine long-term CPF rates.

High rates are applicable only to the first $60,000 of CPF balances. The problem is high rates are used to placate members for their delayed withdrawal. High rates are like Khaw’s degree; see no touch, cannot be eaten. Tens of thousands of CPF members have died without enjoying the fruits of their labour.

19 Why does PAP hail our CPF scheme a success?

To admit the truth would be slapping its own face. Ordinary Singaporeans who retired 10 years ago, in all likelihood, would have been looking for supplementary income. CPF a success? Those who retired 2 decades ago would be in deeper shit. It’s therefore not surprising that more elderly citizens will be seen eking out a living in future. CPF scheme a success?

20 But this is not the failure of the government?

One of the main causes of our retirement shortfall is exorbitant housing prices. The PAP controls both the demand and supply of housing and is singlehandedly responsible for skyrocketing prices. To sustain high prices, PAP legislated more than 60% of total retirement savings for housing use over a 2 to 3 decade period. Without earning a return for a prolonged period, how is CPF to provide for retirement?

21 Low CPF rates are necessary because our savings are guaranteed?

That’s not true because Malaysia’s EPF members have been earning a return of 6% over 20 years without any government guarantee. Over the same period, each CPF member has been paying about 3% of returns to the government every year for a guarantee which really isn’t one.

22 How could a guarantee = no guarantee?

The government, a trustee, and the people are not 2 distinct entities. For the so called guarantee to take effect would mean adverse economic conditions are so severe that taxes may be raised to make good on the CPF ‘guarantee’. Since CPF members will ultimately be affected by such fiscal measures, it is akin to CPF members guaranteeing their own CPF, ie own self guarantee own self.

There are inherent flaws in our CPF scheme which requires a revamp, not tweaks.

GIC has the mandate to manage our nation’s reserves but not CPF savings. There has never been any mention by GIC about serving CPF members’ retirement needs.

PAP does not want GIC to manage CPF funds in a separate account because that would reveal the underperformance of our scholars.

How is it possible that 90% of MPs in a democratic country do not know where hundreds of billions in our reserves have been invested?

The ‘Wayang’ Advisory Panel is in no position to advise anyone because it has access to the same information, selectively-disclosed by GIC, as the public. It does not even know the actual performance of GIC.

In all likelihood, GIC is concealing many Arrium-type investments in its books. GIC could clarify this by publishing a proper set of accounts.

Thinking CPF members should demand transparency – our right – from GIC. The failure of CPF scheme needs to be urgently addressed.