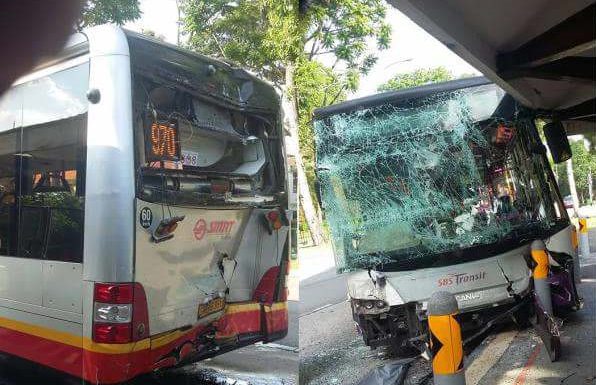 33 people were injured after an accident involving an SMRT bus and an SBS Transit bus occurred this morning at a bus stop at Jalan Jurong Kechil, near Bukit Batok. The accident reportedly occurred when the SBS Transit bus on the 157 service collided into a stationary SMRT bus on the 970 service at the bus stop.

Both buses bore extensive damage. The SBS Transit bus appears to have mounted the kerb and crashed into a bollard. The windshield and front of the bus is destroyed and shards of glass can be seen littering the road, along with other parts of the bus that had dislodged from the vehicle.

SBS Transit bus commuter Linie Gabas Sajonia, who posted the photos above, told reporters: “I heard a big bang and I saw passengers roll over the floor…I saw blood on the floor and the passengers were crying.” The 46-year-old added: “Some passengers in the bus couldn’t walk and were totally injured.”

The police said that they were alerted to the incident around 9.03am while officers from the Singapore Civil Defence Force (SCDF) conveyed 33 people to various hospitals across Singapore. SMRT confirmed that their bus captain is among those injured.

Both transport operators have apologised for the incident. SMRT’s vice president for corporate communications Margaret Teo said: “Our immediate priority is the well-being of our passengers and staff who were aboard our bus. Our CARE team is reaching out to them to render assistance. We would also like to apologise to affected passengers who were inconvenienced by this morning’s accident. Meanwhile, we are assisting the police in their investigations.”

SBS Transit’s senior vice president of corporate communications Tammy Tan said that SBS is rendering assistance to the injured at the various hospitals. She added: “We are very sorry that this has happened and our priority now is the well-being of all injured passengers,” she said. “We are also assisting the police and LTA in their investigations.”

The Land Transport Authority (LTA) has said that it takes a serious view of the accident. It stressed to both bus operators that safety is of “paramount importance”, in a statement, and added: “We are working closely with Police, SBS Transit and SMRT to investigate the incident. We have also sent a team of care officers to the three hospitals to render assistance to the injured.”