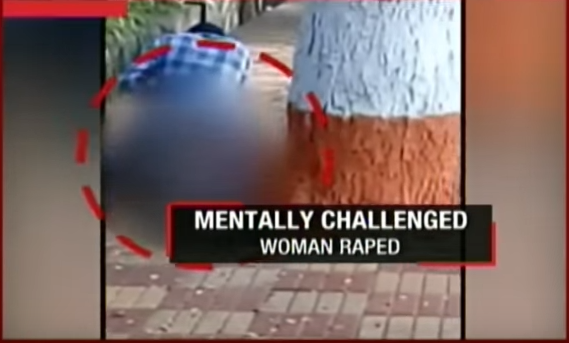 The horrifying rape that occurred in broad daylight last week on a busy street in Visakhapatnam, India has sent shockwaves throughout the country. Many are unable to fathom that something like this could have happened and scores of people, including politicians, have issued strongly worded statements that condemn the nature of the ghastly event.

According to the police, the drunk man attacked the woman while she was resting under a tree. Several reports indicate that she left her home after a fight with her husband. The accused is an alcoholic and a drug addict who has criminal records for theft and drug peddling.

An auto driver who filmed the episode and circulated it widely among his friends was taken to task and booked by the police on Wednesday. He has been charged under section 354C of the Indian Penal Code that deals with voyeurism and section 67A of the Information Technology Act.

The 23-year-old accused, Ganji Shiva, has been arrested and booked for rape.

The disturbing footage that quickly found its way onto social media platforms has sparked a debate in the country about the responsibility of the people who were present at the spot when the incident took place, leading to a barrage of questions.  Should they have done something collectively to stop it?  Especially since he wasn’t in his senses and easy to overpower?

If you witnessed the crime happening but did nothing to stop it, aren’t u a criminal yourself?#visakhapatnam #rape #shameonus @ncbn #AP

How did they let him get away? Why didn’t anyone help? How could this have happened?

The auto driver has been charged because local police found out that he had shared the video with others and violated the victim’s privacy.  Andhra Pradesh Women’s Commission Chairperson Nannapaneni Rajakumari commented, “If the driver filmed and transmitted it to the police only as an evidence, it is acceptable. He should not have leaked it to the media and his friends. That is a crime,” she said.

There is a lot of anger that something like this even happened and no one intervened at the right moment. Maneka Gandhi, Union Minister for Women and Child Development, condemned the incident. “Everybody here is culpable… the people who were thrill seekers preferring to let a woman suffer rather than help her. I am totally outraged by their behaviour… by the behaviour of the man who raped her, and by the people, who by doing nothing, helped it happen,” she told PTI.

Rajakumari echoed this sentiment and said, “It happened in full public glare and none had gone to the rescue of the woman in distress. People should react to such atrocities.”  She further added that the spectators who didn’t do anything should be punished and that she would urge the police to use CCTV footage to identify the onlookers.

The victim will be given compensation. Rajakumari has promised strict action and said that they’ve told the police to book an extremely strong case against the accused.  Efforts have also begun to launch “She Teams” in the area that will be made up of police women who’ll track down molesters and eve teasers.

The upsetting episode is hard to stomach and has also led to several arguments.  Did the witnesses feel like they wouldn’t be able to help physically in that moment? Did they shoot videos to help identify the accused later and help the authorities?  Did they do nothing because they weren’t sure what to do? If that’s the case, the best course of action is to contact local authorities immediately who can come intervene as soon as possible. Keeping constantly in touch with them is also a good idea to let them know what’s going on.  It may be an ethical challenge but it’s absolutely necessary to help someone in distress and save them before it’s too late.

As a bystander to rape, would you record, report or intervene? #ActionHeroTuesday #Vizag

There is however more to this than meets the eye. Co-founder of Zurich-based CrowdGuard, Philip Sunil Urech told the BBC that while the public wonders why no one got involved, people haven’t been trained to intervene in the right manner in such a situation. There are many questions that confuse them at this point such as who leads everyone else and organizes a crowd?

He added that people don’t step up because they’re scared of legal trouble, pressure from the police and are even afraid of losing their lives. In the Visakhapatnam case, eyewitnesses told local authorities that they didn’t interfere because the rapist had made aggressive gestures at them.  Other incidents in the world such as a video from America this year showed a man in distress as five teens mocked him. They filmed him as he drowned, leading to shock and outrage in the country.

India’s response to serious criminal acts such as rape and murder intensified after a high-profile 2012 rape case in Delhi left the nation’s conscience shattered. The Parliament amended the law; allowing juveniles (aged 16 to 18 years) to be tried as adults if they are accused of a heinous crime.  The latest episode has irked and shocked many, leading to people shaming the incident on a large scale and asking important questions.

Ulrech said that certain countries such as Germany have strict rules that make it compulsory to offer help to someone in need or risk being jailed. The Indian Supreme Court previously issued a course of action to safeguard “Good Samaritans” to make sure that those who helped victims of traffic mishaps would not suffer harassment from the law.  Ulrech thinks that extending this to cases involving witnesses who step up to stop sexual assault will change things in a big way.Follow us on Social Media