Was PM Lee completely outsmarted by the Indians? 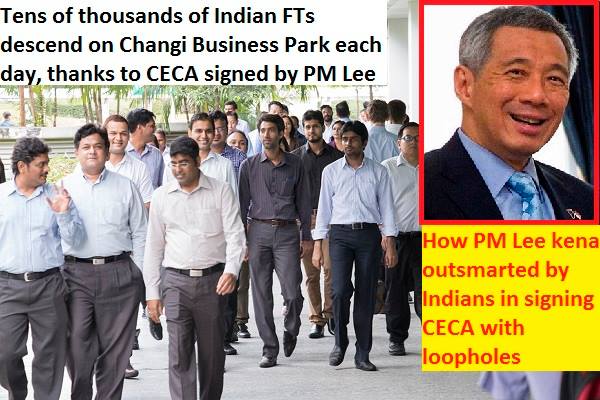 Twelve years ago on 29 June 2005, PM Lee triumphantly went to India to sign the free trade agreement, the Comprehensive Economic Cooperation Agreement or CECA, with the Indian government. At the official dinner hosted by the Indian PM for him in New Delhi, PM Lee happily announced that a “New India” is emerging.

“Singapore is keen to engage this New India,” he said. “With the Comprehensive Economic Cooperation Agreement, or CECA, there is no doubt that our trade and business tie-ups will increase considerably. It (CECA) is much more than a free trade agreement. The CECA will bring our two countries closer together,” he added. “Singapore and India stand to gain immensely from the increased flow of goods, services, investments and talent. As economic linkages expand and the free flow of people and ideas continues, I am confident that the relationship will grow from strength to strength. Distinguished guests, ladies and gentlemen, may I now invite you to raise your glasses and join me in a toast to the good health and success of His Excellency Prime Minister Dr Manmohan Singh, the peace and prosperity of the people of India and the enduring friendship between our countries.”- PM Lee at Dinner hosted by India’s PM, 29 June 2005

And that was how Singapore ended up signing CECA with India.

Bottom line is an “intra-corporate transferee” can stay up to 8 years before he is “rotated” out of the country.

And the person shall be exempted from any labour market testing or economic needs testing, as specified in Article 9.3:

To top it all, CECA Article 9.6 even allows the “intra-corporate transferees” to bring in their spouses or dependents to work too:

Hence with CECA, Indian IT companies like Wipro or Infosys can exploit the “intra-corporate transfer” loophole, to move large number of Indian IT workers into Singapore since CECA does not set any quotas.

They do not have to hire a single Singaporean in their Singapore-based subsidiaries.

Before the PAP govt notices, tens of thousands of Indian IT workers have already quietly entered Singapore with many of them working and settling in the East side of Singapore, creating their own enclaves.

In recent months, driven by higher unemployment among Singaporean PMETs as well as discriminatory hiring complaints from Singaporean workers, the PAP govt started to slow down the approvals of Indian IT professionals to work here.

Some of the Indian IT companies affected include: HCL, TCS, Infosys, Wipro, Cognizant and L&T Infotech.

“This (visa problem) has been lingering for a while but since early-2016, visas are down to a trickle. All Indian companies have received communication on fair consideration, which basically means hiring local people,” the president of Nasscom, their IT association, said.

For all practical purposes, visas have stopped for their IT people, added another Indian industry executive. In retaliation, the Indian government has now decided against expanding the scope of goods where import duties for Singapore goods would be cut unless the concerns of Indian industry are addressed, the report said.

In particular, the Indian govt is against Singapore using our “fair consideration framework” to regulate the employment of foreigners in Singapore.

It looks like the relationship between Singapore and India, instead of growing from “strength to strength” as predicted by PM Lee, it has now hit a low point with India threatening to retaliate with regard to what it perceives as a violation of CECA on Singapore’s part.