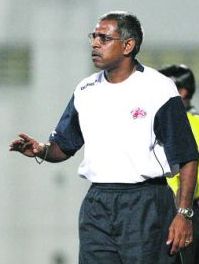 HE’S simply awesome. He’s a fearless football coach with a no-nonsense disciplinarian reputation and always prepared to start coaching anywhere, regardless of his global reputation.

“There’s no shame in coaching kids, it’s all part of building the foundation for the Singapore game,” he once told me a few years ago. “As coaches, we have to ask ourselves: Are we here for personal glory, or for the development of the game?”

This is Elite AFC Coaching Instructor. The former Lions coach Vincent Subramaniam, who returns to the Football Association of Singapore (FAS) after more than a decade abroad.

In my opinion, it is one of the rarest, yet best, moves by the new FAS regime to lure the 62-year-old FIFA & AFC Instructor back from Bangalore, India, where he migrated a decade ago.

In football circles, his latest appointment will be applauded and will be viewed as an “absolute feather in the cap” as he can contribute extensively to coaching at an urgent time when, in overall perspective, the FAS needs a major overhaul.

The FAS said he will immediately be the head coach of the Garena Young Lions for the remainder of the Great Eastern-Hyundai S-League season, and assistant coach to the national Under-22 team for next month’s South-east Asian (SEA) Games.

This unexpected appointment marks the award-winning coach, reputed as a “warm-hearted football disciplinarian” return to Singapore after an absence of 16 years.

“It’s a good opportunity not to be lost,” says Vincent, an Elite Coaching Instructor with the AFC (Asian Football Confederation). “When I heard of the FAS vacancies I applied for it. There’re no short-cuts or pulling of strings. I went through the interview process and advocated what I can do, longer-term, to develop Singapore football.”

His elite Singapore credentials: A two-time S-League title-winning coach with Warriors FC (then known as Singapore Armed Forces FC) from 1997-98, and the S-League’s Coach of the Year for both seasons. He was the Lions head coach from 1998 to 2001, taking over from Barry Whitbread after the Lions won the Suzuki Cup (then known as the Tiger Cup).

Closest to his heart is serving Singapore, although he ventured overseas on a global coaching mission under FIFA and AFC. He says: “While I have been very happy as an AFC Elite coaching instructor the past few years, being able to serve my country and help in the development of the Young Lions players was something close to my heart.”

“I have never lost touch with Singapore although I migrated with family to Bangalore more than a decade ago,” he adds. “My eldest son Thenan is on Facebook and twitter so he keeps me informed about the Made-in-Singapore gossips.”

Fearless to take on the job immmediately, although the Young Lions languish at the bottom of the S-League, Vincent will take his first training session on Thursday. The team’s next match will only be in September, only after the 2017 SEA Games.

His long overdue comeback has been praised in every quarter of the football fraternity, especially so when his football academic credentials are top-of-the-bracket with the highest Asian coaching badge: The Asian Football Confederation (AFC) Professional Diploma.

Former Lions assistant team manager K. Kandasamy says: “I’ve known and worked with Vincent from the 1980s onwards in the Lion City Cup, Piala Razak Cup (Malaysia) and Japan Airlines Cup (Hongkong). I will assure you of one thing: He will not accept any nonsence.

“He imposes a very high level of discipline, just as the SAF staff-sergeant he was in his military career. When it comes to training, attendance, punctuality and even hair cut, he will never compromise. But, off the field, he’s such a wonderful caring coach, a special fatherly figure to the players and he uses this chemistry to get along with his teams. I’ve the utmost respect for him.”

Singapore-born coach Mike Wong, now the newly-minted Technical Director in Laos, says: “Vincent is a special football educator. He has taken every level of age-group in Singapore and regionally and I’ve learnt a lot from him. He’s one of the best Asian football minds with a very good knowledge of game and always thinking out-of-the-box of improving the game.”

Former Lions defender Sreenivasan Selvakumar, who played in the 1980s and 1990s, describes Vincent as a “very positive coach who thinks and feels deeply that he can improve Singapore football”. He adds: “His passion for the game and his willingness to go the extra mile for Singapore is a plus for the languishing football state here. A truly disciplined coach like Vincent is what Singapore needs. Too many softie coaches have not done their jobs!

“I salute Vincent and the FAS for making this bold decision. We definitely need a very qualified coach, with extensive AFC and FIFA credentials, who will maintain discipline and weed out the softies in the team for the Lions to improve. Hopefully, he will be allowed to do his work without any interference.”

Frenchman Richard Tardy, who is the Head Coach of National Youth Teams, gave the thumbs-up, too. He says: “I’m very familiar with Vincent, because he has conducted coaching courses in Singapore. I’m very happy to have somebody like Vincent, with his wealth of experience across Asia, helping me as the Under-22 National Team enters the final phase of preparations for the AFC U23 Championship 2018 qualifiers and SEA Games.”

Award-winning former national coach Jita, the 1981 SNOC ‘Coach of the Year’, who was a SAF military colleague with Vincent in the 1970s, says: “He’s got the gift of coaching the youngsters. He’s patient and caring yet strict and disciplined when he was the Lions head coach. I’m certain he will continue the same philosophy with the Young Lions to help the young players to progress and hopefully make it to the National Team eventually.”

It must be noted that when Vincent was the Lions coach for two years from December 1998, he had a win-percentage of 50 per cent in the first 20 games – 10 wins, three draws and seven defeats. The Lions had the highest FIFA ranking of 81 in December 1998 and dropped to 107 (October 2000).

Vincent, who also coached leading Indian-League club Churchill Brothers and enjoys Person of Indian Origin (PIO) immigration status, once said: “The importance of placing emphasis on younger players must never be forgotten. Invest in youth development programmes. That’s where our future lies. The job of the national coach is totally different from that of the Youth Director. He is seeing the present but we need a youth director to chart our future.

“The right person is very important. We should not allow sentiments, friends, convenience, and influence to interfere with decisions.”

Reputed to be a “thinking coach”, who was educated at Victoria School in the late 1960s, he adds: “I’m proposing some new initiatives. I do not like doing the same things over and over again, it’s not refreshing for anyone or any organisation.”

Suresh Nair is a Singapore-born journalist who has known Vincent Subramaniam and his family for over three decades.Follow us on Social Media