All throughout the 32-second video clip, laughter can be heard. It seems that the delivery rider, his rescuer and the person who filmed the incident all know each other

Singapore—When a GrabFood Rider found himself stuck in an elevator recently, it was a good thing there was a bystander nearby who came to his aid. And since the delivery rider seemed to be in no real danger, the whole incident came across as more humorous than shocking.

A video of what happened was posted on Twitter on Monday night (June 8) and has since gone viral.

Twitter user pissy pamper (@yanmoneyy) posted the video, which has gotten almost 52,000 views. The clip showed the rider pinned against the wall of the elevator by his bike in what looked like an awkward and uncomfortable position.

The delivery rider was straddling his bike, with his back against the front wall of the lift. The front wheel of the bike is against the lift’s back wall, and the rear wheel is on the floor, effectively trapping the rider, who still has his big food delivery bag strapped to his back.

The good thing is that he can be seen laughing at his predicament, and laughter can be heard in the background as well so that viewers know the situation isn’t too serious.

He’s then approached by a man, dressed in black from head to toe, and filming the incident, who stops the lift from moving. The man in black is laughing so hard he doesn’t even extract the delivery rider from his tight spot right away but continues to film him in his awkward position.

All throughout the 32-second video clip, laughter can be heard. It seems that the delivery rider, his rescuer and the person who filmed the incident all know each other.

@yanmoneyy wrote in the follow-up tweets: “context: ridwan was angry he said he ‘going home’ went down instead to buy water so me and the rest went to the third floor when he’s going up the lift and decided to put a brick and bring it up to the 4th floor

smh my english rabz. Psps we sent a brick up to the fourth floor to “prank” him. Man i need my sleep.”

Later, the rider himself commented on the tweet thread to explain how he got stuck in the first place. “if you’re wondering, first i went in the lift, and the bag was basically right infront of the lift sensor, so it couldn’t close, i decided to smooch (sic) to the left, but i still couldn’t fit so i bend down a lil bit, but the bike then prevented me from getting backup and yeah tu je,” tweeted sxtanxc (@sxdbxar).

There seemed to be no lasting harm done to the rider, who later retweeted the clip and commented, “AHAHAHAH BDH I DIDNT KNOW I WAS THAT TRENDING.” (sic)

People commenting asked why the delivery rider didn’t leave his bike downstairs in the first place.

This was answered by a former rider, who said it was just as easy to bring your bike wherever you deliver food. 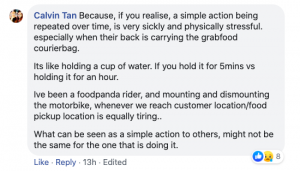