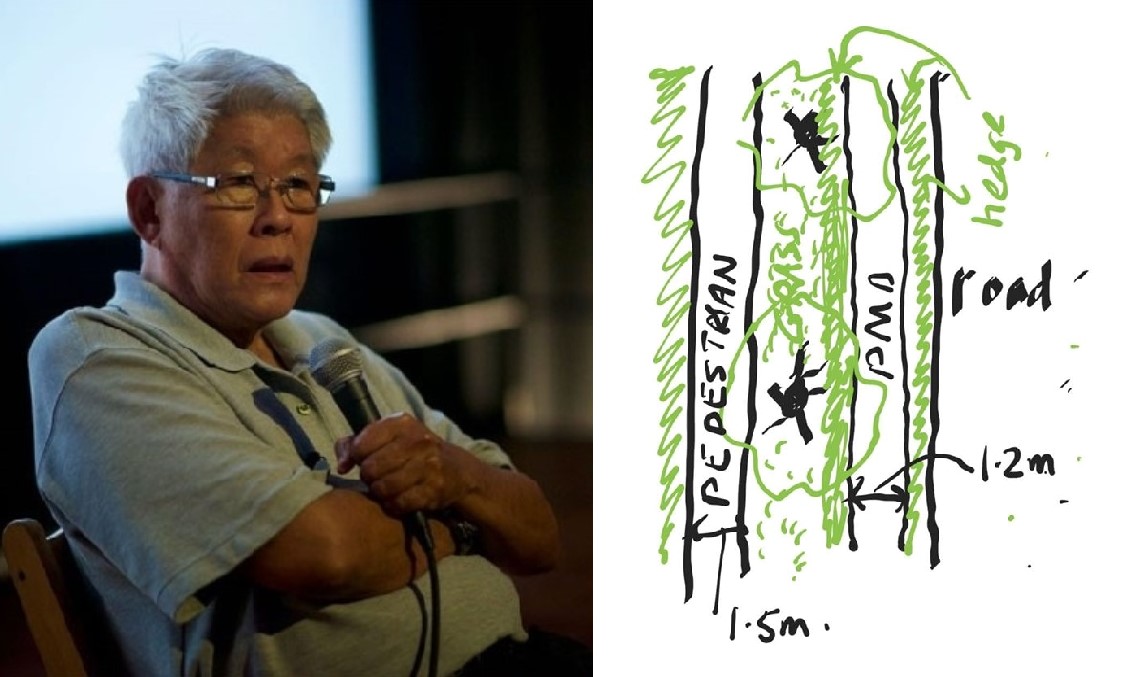 Veteran architect Tay Kheng Soon has proposed a possible solution to the prevent clashes between Personal Mobility Device (PMD) users and pedestrians, in the wake of the Government’s ban on PMD use on public footpaths that went into effect last week.

Following a spate of PMD-related accidents, the Government announced last Monday (4 Nov) that all e-scooters will be banned from public footpaths and that e-scooter riders may now only use their PMDs on cycling and park connector network paths. The new rule was introduced suddenly and went into effect the very next day, on Tuesday (5 Nov).

The Land Transport Authority (LTA), a statutory board under the Ministry of Transport, will issue a warning to those who flout the ban during the grace period from 5 Nov to 31 Dec. From 1 Jan 2020, those caught riding e-scooters on public footpaths will face fines of up to S$2,000 and/or imprisonment of up to three months.

Mr Tay, the architect behind iconic structures in Singapore like KK Women’s and Children’s Hospital, Golden Mile Complex and the People’s Park Complex, has said that he does not believe punitive measures like fines and jail terms are the way forward in preventing clashes between pedestrians and PMD users.

Asserting that this is not too difficult an issue and that careful planning can help resolve clashes, Mr Tay offered to lead a team to help find solutions. In a Facebook post published last Friday (8 Nov), he wrote: “PMDs and pedestrians clash: there have to be many different design solutions for different situations. It is not a difficult problem…all it takes is careful and sympathetic thinking not easy punitive solutions.

“I am willing to lead a group of concerned people to find solutions. First do photo document each and every situation then solve each one with the most technically durable and economical solution.”

On Saturday (9 Nov), Mr Tay revealed that he will be meeting ruling party parliamentarian Murali Pillai to discuss short-term, mid-term and long-term solutions to better avoid conflicts between PMD users and pedestrians. He wrote:

“I am meeting Mr Murali, MP for Bukit Batok on Wed next week to discuss the PMD/pedestrian conflict issue to see how it can be solved for near term, mid term and long term. The solutions must be immediately doable and then be elaborated towards a final solution without too many kinks. No system is perfect…”

Mr Tay continued studying the issue and proposed two immediately doable solutions to prevent footpath accidents instead of resorting to a ban. He shared on Sunday (10 Nov) that the cheapest solution is to “create a pmd and bicycle lane on the side of category 3 neighbourhood roads by painting a double yellow line.”

His alternative solution is to “build a narrow 1.2 m wide pmd and bike path flanked by low hedges to compensate for loss of grass. In fact two hedges of 1 m high each produces 4m of green! Bollards at crossings with swing barriers will allow wheel chair and pmd and bike inter phase. All doable within 6 months.”

Sharing the following image, Mr Tay added: “This is the typical situation. The grass verge is where the pmd path can be put and greenery compensated by two flanking green hedges that increases greenery to 4m+ trees are undisturbed.”

Mr Tay went a step further and produced a rough sketch of the design solution he proposed. The sketch he published on Facebook shows a 1.2-metre path dedicated to PMD users that is separated from the footpath meant for pedestrians by a hedge and bollards at the junctions between the paths.

He suggested: “I think this is a possible solution to the pmd/pedestrian clash problem. Greenery is also compensated by low hedges along the pmd path. Bollards at the junction between pedestrians and pmds will solve the inter phase.”

This is not the first time Mr Tay has proposed solutions to alleviate conflicts between PMD riders and pedestrians. Last month, Mr Tay proposed “easy” design alterations the Government could implement to help pedestrians and PMD riders co-exist more peacefully without banning PMDs altogether. He suggested:

Mr Tay – who presently serves as Adjunct Professor at the National University of Singapore’s Department of Architecture – later provided examples of how the existing walkways are designed and how they can be improved.

In one example he provided, Mr Tay pointed out that the pillars supporting the shelter covering the walkway can be easily altered at little cost to widen the footpath: