Unity in Diversity: Pritam Singh’s post after WP MPs voted on 377A draws praise from netizens

Mr Singh’s post and photo, as well as the decision to lift the party whip, received a positive response from many netizens.

Workers’ Party chief and Leader of the Opposition Pritam Singh posted a picture of the WP Members of Parliament from earlier this week with the hashtag #unityindiversity.

Missing from the photo is Mr Faisal Manap, the WP vice-chair, who could not attend the sittings this week as he is out with Covid.

Mr Singh said in Parliament on Monday (Nov 28) that he was lifting the party Whip and allowing each MP to vote according to their conscience on the repeal of Section 377A of the Penal Code, which criminalizes sexual relations between consenting adult males. Some of the WP MPs voted in favour of the repeal while others did not.

The Singapore Parliament voted on Tuesday (29 Nov) to repeal Section 377A of the Penal Code, a colonial-era law which criminalises gay sex between men, Yahoo News reported. It also voted to endorse amendments to the Constitution to protect the current definition of marriage from legal challenge.

The repeal of 377A saw 93 Members of Parliament voting in favour of the move. Workers’ Party MPs Gerald Giam (Aljunied GRC) and Dennis Tan (Hougang), as well as Nominated MP Hoon Hian Teck, voted against the repeal, as did Nominated MP Hoon Hian Teck. Had Mr Manap been present, he would also have voted against the repeal, Mr Singh said in a speech on Monday.

Mr Singh’s post and photo, as well as the decision to lift the party whip, received a positive response from many netizens.

Some netizens praised the speeches the WP MPs gave.

Some commenters thanked the WP MPs.

Other netizens left comments of support for the WP. 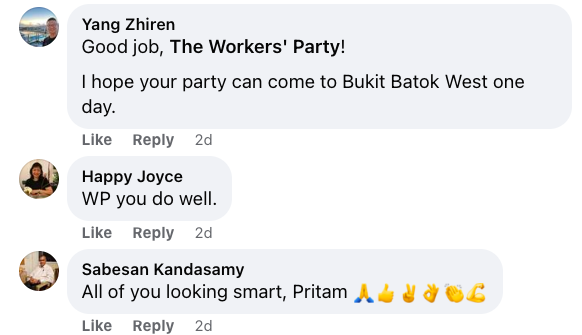 He Ting Ru supports 377A repeal: ‘I don’t believe we should have a law that’s plainly & obviously discriminatory’