The Independent Singapore News
Home News Featured News Trust between "millionaire ministers" and the people "has never been so low":...

Trust between “millionaire ministers” and the people “has never been so low”: SDP video trends online 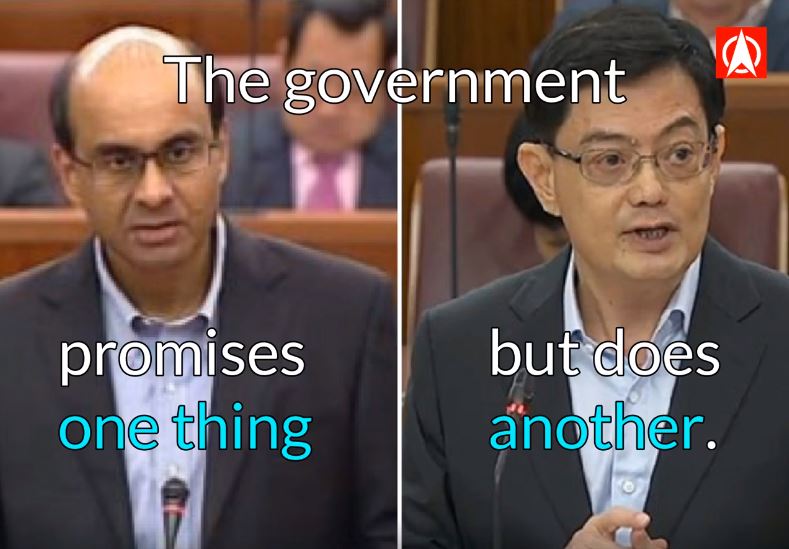 The Singapore Democratic Party (SDP) has released a video questioning Government spending on social media, yesterday. The video, which comes just a few days after Finance Minister Heng Swee Keat delivered Budget 2018, has been trending online with over 32,000 views, and over 1,000 shares.

The video highlights Deputy Prime Minister Tharman Shanmugaratnam’s remarks in 2015 to Heng Swee Keat’s tax plan. Tharman had said, “We have prepared ourselves in advance. We will be in a good position for at least the rest of this decade.”

The SDP then asks why the government increased carpark fees, ERP rates, gas and electricity charges and hiked water prices by a whopping 30 per cent in the past two years, before asserting that the impending GST hike will further burden the people.

This has eroded the trust between “millionaire ministers” – who “cannot understand” the difficulties the common man faces – and the people according to the SDP:

“In 2015, DPM Tharman said that the “revenue measures the government had already undertaken will provide sufficiently for the increased spending planned for the rest of this decade.”

“So why did the govt increase water prices, carpark fees, ERP rates and gas & electricity charges, etc, in 2016 and 2017?

“Last year, it collected so much taxes that after all the govt expenses, it ended up with a $9.6 billion surplus!

“The government promises one thing but does another.

“Our millionaire ministers – the highest paid politicians in the world – cannot understand that the people have difficulty making ends meet.

“To make matters worse, the PAP will increase the GST from 7% to 9%. All this in a city that is already the most expensive in the world, with increasing retrenchments, a shrinking job market, and burgeoning household debt.

“The trust between the people and the government has never been so low.”

Say one thing, do another