The Independent Singapore News
Home News “This could be their very last party. Is this worth it?” Netizens...

“This could be their very last party. Is this worth it?” Netizens blast last-minute revellers

As night spots closed for over a month, party goers still went for a last hurrah much to the anger of netizens who were furious, calling them out for what they deemed as selfish and irresponsible behavior

Singapore—Dozens of people came out for one last night of partying before Singapore shut down its night spots for over a month. The partygoers, mostly in their late teens and twenties, flocked to their favorite places before they are temporarily shuttered from 11:59 pm on Thursday (March 26) and are expected to remain shut until April 30.

These measures, along with several others, have been put in place by the Government in an effort to prevent a further spread of the coronavirus that has infected nearly 450,000 people around the globe, with a death toll of a little over 20,000.

Netizens were furious at the partygoers, calling them out for what they deemed as selfish and irresponsible behavior. Many commented on TODAY’s March 26 article entitled, ‘One last night of fun’: Revellers throng nightspots before closures, but merrymaking masks worries over shattered livelihoods‘.

One woman wrote, “What’s sooo important to go pub drinking, travelling, eating out having fun at this critical time while our frontline people putting their safety & lives at high risk trying to cope with the increasing (sic) infected people?” 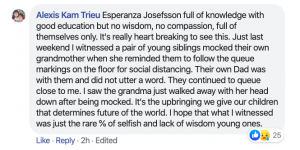 Others believe that it is not a matter of being uneducated, but the amount of selfishness and self-centeredness one has.

One individual commented, “If they get infected, this could be their very last party. Is this worth it?”

Even those who say they don’t normally post comments were moved to do so in this situation.

A netizen, appalled at what they saw as a lack of care for frontliners, wrote, “They have no social responsibility!

The joke of the whole thing is they can be happy and laugh while others are suffering!

And they don’t care about all those frontline people who are risking their lives to save lives!

My heart pains for the people who are sacrificing themselves to combat this difficult period!” Several people proposed that if these young people should prove to be infected, they should bear the consequences of their actions.

Others even went so far as suggesting parents should lock up their children for two weeks.

And one compared those who went partying to those who still attend religious gatherings in other countries.

Yet others suggested that the establishment owners should be penalized as well.

Read also: Lawrence Wong appeals to Singaporeans to stay home as much as possible