The Independent News
Home News The shame of a 1st world nation?

The shame of a 1st world nation? 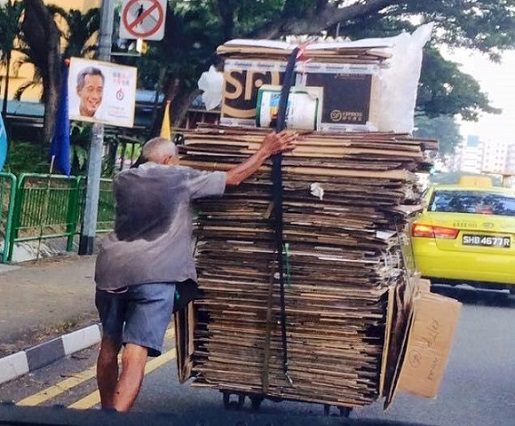 The faces and insecurities of Singapore’s elderly working poor

I refer to the article “Ploughing on: The faces and insecurities of Singapore’s elderly working poor” (Channel NewsAsia, May 7).

It states that “The poverty rate has been rising among the working elderly, one study shows. Why do seniors here feel the need to work for long hours and low pay, despite the help schemes available for the needy?

Collecting 200kg cardboards for $20 a day

A good day is when the brothers collectively make about S$20. That’s with a haul of nearly 200kg (cardboards), depending on price fluctuations. Said Eddie: “After a long time, our bones start to ache. It really hurts.””

Comment: Someone said that some elderly collect cardboards for the exercise

“In recent years they have become more visible as food court cleaners, servers, security guards, tissue-sellers and scrap collectors. Given Singapore’s plethora of help schemes for the needy – such as the Pioneer Generation Package (PGP) and Silver Support Scheme for the old – why do the elderly poor feel the need to work for long hours and often low pay?

According to Manpower Ministry figures, in 2016 about 23 per cent of persons over 65 in the formal workforce were earning less than S$1,000 a month.”

Overall, Dr Ng has estimated that 6 in 10 elderly people in Singapore in 2011 were poor by that measurement.

He is working, but not consistently enough to qualify for the Workfare wage supplement. He can’t access his CPF funds until he hits 65. And the fact that he has a son makes qualifying for certain social assistance tough.

Comment: Why does Workfare require one to be “consistently” working for a full month in order to qualify?

His son, who works as a salesman, is able to give him “S$100 here and there” but his income is inconstant, Eddie said.

Comment: Why does ComCare require all the children’s financial status for means testing, regardless of how much help the children may be giving or able to give to their parents?

Dr Ng calls this “a classic case of how there are various gaps (in the system) that I think we can do better at patching”.

(Note: Since being alerted to Mr Ng’s and Eddie’s cases, the Ministry of Social and Family Development says its Social Service Offices have reached out to them.).

But in the 1990s, he said, the influx of foreign workers who were willing to work longer hours for less pay made the industry untenable. So he quit.

“There was less work to be had. We could not compete”

Starting over as a food stall assistant, he soon found that getting a position that paid adequately was tough. Jobless at one stage, he resorted to free food handouts.

Eventually, the Community Development Council helped place him in a job that now pays S$1,000 a month – enough, he says, to live on.

He picked up landscaping at the Employment and Employability Institute and now draws S$1,300 a month, working a five-day week as a gardener.

Pay up, HDB rental up even more?

The irony? He says he’s been asking his boss to lower his pay – because he’s afraid he might get a reduced subsidy on his S$50-a-month rental flat.

“Then there is the Workfare supplement, paid by the State to top up the wages of eligible low-income older workers.

The hitch? Those doing informal work like Eddie, who don’t work for a full month, don’t benefit. And manual jobs carry the element of uncertainty, often depending on health, noted Dr Ng: “I may have enough for tomorrow, but I have no way to plan for next year and the next.”

Working part-time not by choice?

She now makes just S$350 a month working three-hour days, four times a week. But with savings squirreled away over the years, she can meet her living expenses, she says.”

Comment: according to the Ministry of Manpower’s (MOM) Yearbook of Manpower Statistics 2016 –there were 47,000 residents earning less than $500.

TOO MANY SETS OF HOOPS?

“For those less lucky and in need of temporary financial aid, there is the ComCare Short to Medium Term Assistance scheme. Those aged 55 and over made up about 35 per cent of applicants in 2015 – up from 29 per cent in 2012.

“Too many targetted help schemes”

The problem, rather, is that there are too many targetted help schemes – with varying criteria and limiting conditions attached, observers say. This creates two types of problems.

One: Confusion and lack of understanding, which might explain why some elderly poor would rather just carry on working than attempt to seek support. Said Dr Ng:

Researchers don’t understand the schemes fully, civil servants don’t often understand all the schemes available, so how would those people know where to get the help?

He continued: “If I am collecting cardboard, am I going to spend time figuring out how the schemes work, and then test out each one to see if I qualify; or am I going to work so that I can secure tomorrow’s expenses? I am going to work!”

Two: Having to jump through hoops to meet criteria, means that some will fall through the cracks.

Comment: I have come across some elderly poor who were advised to sue their children under the Parents Maintenance Tribunal.

The further danger, said Dr Ng, is that such rigorous means-testing would “discourage others who might actually qualify if they tried”.

Ms Wong Yock Leng, a senior social worker with Tsao Foundation, said: “When you ask for ComCare assistance, they will check for everything… That’s why a lot of people don’t apply anymore after that. It’s so daunting, the whole process.”

The shame of a 1st world nation?

After reading the above – don’t you feel ashamed that we keep calling ourselves a first world nation?