Syonan – The Museum of Betrayal 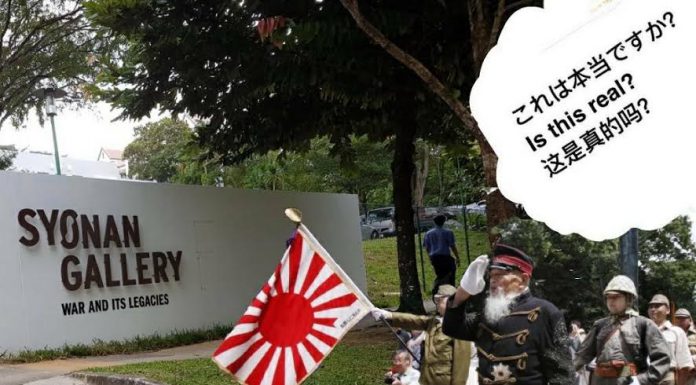 I was about to release a photo essay on my visit to the London Imperial War Museum on Sunday when I saw the  news about a Singapore museum to be launched on Wednesday.  I was shocked.

Who in his or her right mind would name a museum in Singapore ‘Syonan’? Syonan-To is the name given to Singapore by the Japanese invaders during the War World II.

The decision with the name, and the timing is an affront to the memory of the 50,000 Singaporeans who were executed by the Japanese, the majority of whom were from the 600,000 Chinese communities. The number executed in Singapore was the highest per capita of local population during the Second World War. Those hunted by the Japanese during the soo-ching cleansing campaign included Tan Kah Kee, nicknamed the Henry-Ford of Malaya. He  was instrumental in raising enormous funds in support of the anti-Japanese War efforts in China. Amongst the thousands killed were leftwing activists, communists, koumintang supporters and those who campaigned for the boycott of Japanese goods prior to the invasion. The killings were indiscriminate – young bespectacled Chinese and those with soft hands were also executed.

(Read also: As S’pore grows closer to Japan amidst the demise of TPP, naming of WW2 museum to ‘Syonan’ draws flak)

Ostensibly, the responsibility for such politically vulgar decisions was placed on focus groups. If members of the focus groups were truly representative of the Singapore populace, then something is seriously wrong with the teaching of history. When I raised this to a number of my friends in London, their immediate responses were “sick” and “what’s wrong with Singapore”.

The Synonan Gallery is meant to be a War Museum. I have my doubts if this War Museum would feature a Gallery of Running Dogs*. If they do, then at least two of Singapore’s very prominent political leaders would have their place of dishonour.

Apart from its unfortunate name, the Museum will be judged by how the curators deal with the role played by Singaporeans during the anti-Japanese war efforts. To date, the only acceptable face of resistance to the Japanese invaders was Lim Bo Seng and the British controlled force 136.

Offical history books hardly touch on the role played by left wing activists in the pre-war mass movement to raise funds in support of the anti-war efforts in the China, and the campaign to boycott Japanese goods. The resistance led by the Malayan Communist Party during the war has so far been marginalised in official propaganda. In truth, by 1940, the MCP had a membership of 5000, with 100,000 supporters. (Singapore: The Encyclopedia) These are the challenges faced by the curators if they were to make this a museum of truth, and not of propaganda.

Having visited the Imperial War Museum on Sunday, I can recommend the Singapore curators to draw inspiration from the current displays at London’s Imperial War Museum, which incidentally will be hosting a People Power: Fighting for Peace exhibition in March.

In the current displays which feature the war in Iraq, Afghanistan and Syria, the curators at the Imperial War Museum do not shy away from issues or images that might cause embarrassment to the establishment, nor do they follow the narratives set by the government. It challenges conventional wisdom about wars, past and present, despite the fact that the Museum is funded by government grants, and works closely with the military establishment.

If Britain can, why can’t Singapore?

*Running Dog is a popular Chinese colloquial term for those for collaborated with the Japanese.

Its European equivalent is ‘quisling’. The word originates from the Norwegian war-time leader Vidkun Quisling, who headed a domestic Nazi collaborationist regime during the Second World War. Its in English, Norwegian, Dutch, French, German etc.

‘Quisling’ in Japanese is 売国奴 meaning the slave who sells his country.
It looks like the Japanese look harshly at their own imperial slaves. While the Chinese regard Quislings as less than human.