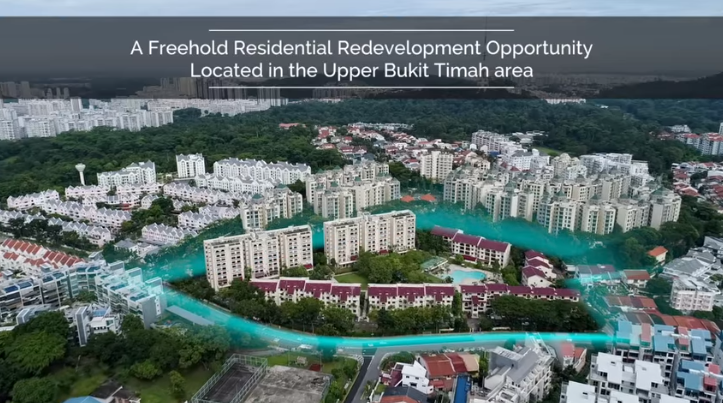 Strata Titles Board today blocked the collective sale of Goodluck Garden with a stop order after seven minority owners objected to the sale on the grounds of lack of good faith. Two rounds of mediation efforts were made before the stop order was issued.

The Strata Titles Board will not approve an en bloc sale application if it was satisfied that the sale was not conducted in good faith, after taking into account 3 factors:

Once the Strata Titles Board issues the stop order, en-bloc applicants who wish to proceed with the en-bloc sale will have to apply to the High court for approval of the collective sale within fourteen days.

This was a key amendment made in 2010 to the Land Titles (Strata) Act which enhanced the powers of the Strata Titles Board.

Goodluck Garden is a condominium comprising eight blocks, made up of 208 residential units and 2 commercial shops was sold to the Qingjian Group of Companies for $610 million. The apartment sizes range from 95 sq m to 182 sq m, with the two shops sized 30 sq m and 91 sq m respectively. The development has a site area of 33,457.2 sq m (approx. 360,130 sq ft) and is slightly elevated with a frontage of approximately 300 metres onto Toh Tuck Road.

Knight Frank Singapore, the exclusive marketing agent representing the owners of Goodluck Garden via their collective sale committee, in January announced the commencement of the tender for the sale of Goodluck Garden, a freehold residential redevelopment site along Toh Tuck Road.

Under the 2014 Master Plan, the site is zoned “Residential” with a Gross Plot Ratio (GPR) of 1.4. This translates to a maximum Gross Floor Area (GFA) of approximately 504,182 sq ft, and based on average size of 753 sq ft, can potentially yield 669 new units in the new development.

Goodluck Garden is nestled within a private residential enclave, surrounded by landed homes and private condominiums, including The Beverly, Nottinghill Suites, The Creek @ Bukit and soon-to-be-launched Daintree Residences.

Popular schools in the vicinity include Pei Hwa Presbyterian Primary School and Bukit Timah Primary School, which are within 1 km from the development. Other primary schools within 2 km from Goodluck Garden include Methodist Girls’ School (Primary), Bukit View Primary School and Keming Primary School. Other established tertiary institutions including Ngee Ann Polytechnic and the Singapore University of Social Science are also within good proximity to the site.

“This presents a rare opportunity to acquire one of the largest freehold, residential redevelopment sites within walking distance to an MRT station,” said Mr Ian Loh (Executive Director and Head of Investment and Capital Markets, Knight Frank Singapore) when announcing the tender.

He added: “The owners are expecting offers above their reserve price of S$550 million. Including an additional estimated development charge of approximately S$63.2 million (subject to verification and confirmation with the relevant authorities on the development baseline) payable for the intensification of the site to the maximum GFA, this translates to a land rate of approximately $1,216 psf ppr.”

The sale of Goodluck Garden was the third biggest en bloc bid won this year, after Park West’s successful en bloc sale of $841 million in January, and Pearl Bank Apartments’ S$728 million collective sale in February. The sale price translated to a land price of about S$1,210 per square foot per plot ratio (psf ppr) based on the potential gross floor area of 46,840.08 sq m.

The successful bidders did not have to pay the development charge for the 10-per-cent bonus balcony because of a high development baseline and this lowered the land price to S$1,100 psf ppr. At the close of tender in early March, owners of 169 out of 210 units making up 81.93 per cent of the total strata area and 81.35 per cent of the total share value in Goodluck Garden expressed consent to the collective sale.

Commenting on the stop order, Paul Ho the chief mortgage consultant at icompareloan.com said that “owners of en bloc developments should not think that just because a qualified developer has made a bid at or above the reserve price, and just because the Sales Committee has agreed to accept the bid on behalf of the subsidiary proprietors , the transaction is considered done.”

In 2016, Qingjian made news when it clinched the en bloc tender of Shunfu Ville with an offer of $638 million. The sale later faced several hurdles when a minority of owners objected to the sale and the Strata Titles Board ordered a stop order.

The owners later filed an appeal to the High Court, with one objection asking whether the transaction was made in good faith, considering the sale price. The Court of Appeal dismissed the appeal lodged by objectors and ruled that although the “committee was in somewhat of a rush, there was nothing to suggest an absence of good faith or impropriety in the transaction.”

If you are hunting for a dream home, our Panel of Property agents and the mortgage consultants at icompareloan.com can help you with affordability assessment and promotional loans. The services of our mortgage loan experts are free. Our analysis will give industrial property loan seekers better ease of mind on interest rate volatility and repayments.