The Independent News
Home News Featured News Singaporeans express support for Li Shengwu as he declines to participate in...

Singaporeans have expressed support for Li Shengwu on social media after he revealed that he will no longer be participating in legal proceedings brought on by the Attorney-General’s Chambers (AGC).

The AGC’s action came after Shengwu’s father Lee Hsien Yang and aunt Lee Wei Ling accused their elder brother Prime Minister Lee Hsien Loong of abusing his power and trying to subvert their late father’s last wishes. PM Lee cleared himself of the charges his siblings levelled against him in Parliament.

Shengwu – who serves as an Assistant Professor in the world-renowned Harvard University’s Economics Department – earlier asserted that he has no intention to disrupt his “happy” and “fulfilling” life in the US by returning to Singapore to face the legal proceedings initiated by the AGC.

Lawyers based in Singapore represented him in the lawsuit but Shengwu said on Wednesday (22 Jan) that he will no longer participate in the legal proceedings given the AGC’s conduct in the case. He explained:

“I have an announcement to make regarding the Singapore state’s prosecution against me. As you may remember, in 2017, during the events widely known as ‘Oxleygate’, my uncle Lee Hsien Loong was accused by his siblings of abusing state power to bully them and to subvert his own father’s dying wish.

“Shortly after, the Singapore Attorney General’s Chambers (AGC) started prosecuting me for allegedly “scandalising the judiciary” in a private Facebook post. This prosecution has continued for years, and during that time the AGC has submitted thousands of pages of legal documents over one paragraph on social media.

“Recently, the AGC applied to strike out parts of my own defense affidavit, with the result that they will not be considered at the trial. Moreover, they demanded that these parts be sealed in the court record, so that the public cannot know what the removed parts contain.

“This is not an isolated incident, but part of a broader pattern of unusual conduct by the AGC. For instance, when arguing jurisdiction in the court of appeals, the AGC argued that a new piece of legislation should be retroactively applied against me. The court saw it as unfair for the new legislation to apply retrospectively.

“In light of these events, I have decided that I will not continue to participate in the proceedings against me. I will not dignify the AGC’s conduct by my participation.”

Singaporeans responding to Shengwu’s post online expressed their support for him and urged him to stay strong. Shengwu’s personal friends on Facebook said that they were sorry about what he has been facing and praised his courage in the face of such a situation: Lee Hsien Yang and Lee Wei Ling also shared Shengwu’s post on their own Facebook pages. Most netizens responding to their posts said that they stand by Shengwu while some urged Mr Lee to join the opposition and challenge his elder brother at the polls: 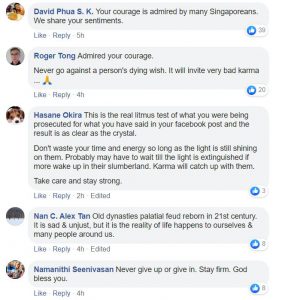 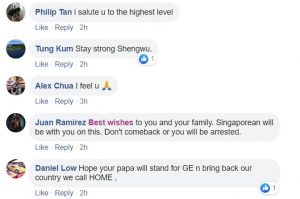