The Independent Singapore News
Home News Featured News Singaporean detained without trial for self-radicalism and intent to join the terrorist...

Between January and March 2019, one Singaporean was issued with an Order of Detention (OD) under the Internal Security Act (ISA), while another two were issued with Restriction Orders (RO) under the ISA for their involvement in terrorism-related conduct 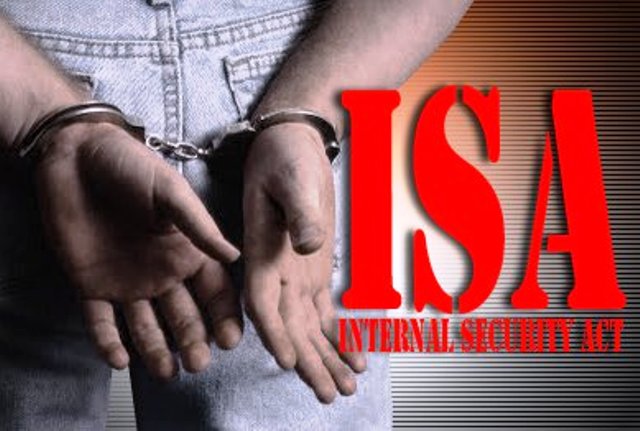 The Ministry of Home Affairs (MHA) today (June 25) said in a press release that between January and March 2019, one Singaporean was issued with an Order of Detention (OD) under the Internal Security Act (ISA), while another two were issued with Restriction Orders (RO) under the ISA for their involvement in terrorism-related conduct. It added, “separately, in March and June 2019, four Singaporeans were released from detention with restrictions, and the RO issued against one Singaporean was allowed to lapse.”

Explaining its decision to detain Imran bin Mahmood without trial under the ISA, MHA said:

“Imran bin Mahmood (Imran), a 40-year-old unemployed Singaporean, was detained in January 2019 under the ISA after investigations showed that he was radicalised and harboured the intention to travel to Syria to join the terrorist group ISIS.

“Imran’s radicalisation began sometime in 2013 when he started listening to online lectures by foreign religious preachers, including those who preached about the imminent coming of the end-times. Through his exposure to the radical online material, Imran became a strong supporter of ISIS’s violent objectives and actions.

“By 2014, Imran had developed a desire to live under ISIS’s so-called caliphate in Syria/Iraq and researched on viable entry points for himself into Syria. He was willing to take up arms to defend or expand ISIS’s territory, and believed that he would achieve martyrdom if he died fighting for ISIS.

“Imran questioned ISIS’s legitimacy when it started to suffer territorial losses in 2017, but did not denounce ISIS. He continued to believe that it was his religious duty to fight alongside any group trying to establish a rightful caliphate in Syria, and that his radical views were legitimate.

“He was also prepared to join militant and terrorist groups involved in the Syrian conflict, namely the Free Syrian Army and Hayat Tahrir Al-Sham (an Al-Qaeda aligned faction).”

Besides the detention order, restriction orders were placed on a Singaporean, Mohamad Fairuz bin Junaidi (Fairuz), a 39-year-old food deliveryman. He was issued with a RO in March 2019 after investigations found that he was influenced by ISIS’s radical ideology and had considered travelling to Syria to join ISIS.

The Ministry said, “Fairuz was emotionally affected by reports on the killing of Sunni Muslims in the Syrian civil war. He considered travelling to Syria to join ISIS and was prepared to take up arms and fight alongside ISIS. He believed that he would be a martyr if he died while doing so. He also refused to believe mainstream media reporting about ISIS’s atrocities, and saw them as fabrications to discredit the terrorist group.”

It added, “Fairuz began to have doubts about ISIS’s legitimacy in 2017 after he read negative reports about ISIS on Facebook, and was also swayed by criticisms against ISIS. He will undergo counselling/rehabilitation while on RO.”

Another Singaporean, Rasidah binte Mazlan (Rasidah) was also issued with RO in March 2019. Rasidah, a 62-year-old production technician, was in contact with multiple foreign entities suspected of involvement in terrorism-related activities, including individuals who had expressed support for ISIS.

Investigations established that “Rasidah’s contacts with these individuals were mainly driven by her deep sympathy for Muslims suffering in overseas conflicts,” MHA said.

MHA added, “investigations showed that Her indiscriminate online activity rendered her vulnerable to adverse influence and recruitment by terrorist elements who pose a threat to Singapore. As such, she was placed on a RO to prevent her from resuming her contacts with such elements, and to allow her to undergo counselling/rehabilitation.”

Besides the Singaporeans who were slapped with detention and Restriction Orders, four Singaporean ISA detainees were released from detention in March and June 2019. Also, the RO issued in June 2015 against a then 17-year-old Singaporean youth for supporting ISIS was allowed to lapse upon its expiry in June 2019 as he has shown good progress in his rehabilitation.-/TISGFollow us on Social Media