Many students and parents faced tremendous pressure yesterday as Primary 6 students collected their Primary School Leaving Examination (PSLE) results. Amid the tension, one father’s social media post won the hearts of hundreds online as he celebrated his son regardless of his PSLE score.

Drummer Ray Aziz wrote yesterday (25 Nov) that his post is a message to all parents who are disappointed in their child’s exam results. Expressing disgust at the stories about those who discourage their children who may not have performed as well as they would have wished, Mr Ray celebrated his son for simply being his son and for having good attributes that go beyond an assessment.

Using the hashtag ‘#stopthestigma’, Mr Ray wrote online: “I am really disgusted by the stories I’ve heard about parents scolding and demoralising their children after receiving their results today. So…This is a message to all parents who are disappointed in their child’s PSLE score.

Mr Ray proudly shared a photo of his son holding up a sheet of paper that displays his name, his PSLE score of 194 and three of his strengths. Young Aden Ray lists his top strengths as art, sports and a caring heart.

The heartwarming post quickly went viral on social media and drew over 800 likes in a span of hours. 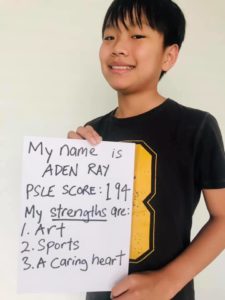 The PSLE is widely considered a great source of pressure for 12-year-olds since their scores seemed to determine the rest of their educational future under the streaming system.

The streaming system divides students according to their PSLE scores and places them in one of three streams: the Express, Normal (Academic) and Normal (Technical) streams. Those who did well in the PSLE and make it to Express stream more easily attended junior colleges and polytechnics at the tertiary level while those who performed less well in the PSLE had poorer prospects.

Some of the stress associated with the PSLE was alleviated last year when the Government announced that it will abolish streaming. The streaming system will be phased out by 2024 and and will be replaced with full subject-based banding.

A new PSLE scoring system will also come into effect next year. Students from 2021 onwards will be graded based on their individual performance in the subjects, regardless of how their peers have performed, as part of an effort to move away from an “over-emphasis” on academic results.