"Continue to keep up your learning, explore what you are good at and care about most, stay curious and keep learning!" said Mr Heng

Amid the criticism Education Minister Lawrence Wong is facing after telling Primary 6 pupils that they are not defined by their Primary School Leaving Examination (PSLE) scores, some observers have pointed out that Deputy Prime Minister Heng Swee Keat made similar comments when PSLE results were released last week.

On Wednesday (25 Nov), Mr Heng praised this year’s cohort of Primary 6 pupils for overcoming the challenges brought on by the COVID-19 pandemic and for showing resilience and grit in adapting to home-based learning and coping with the safe management measures that were in place when they returned to school. 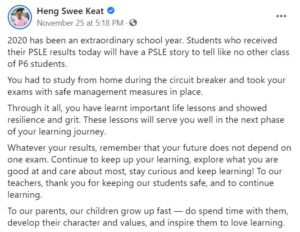 Mr Wong made similar remarks on his own Facebook page, that same day. He advised students: “Whatever your results, there is no need to dwell too much on them. Your scores do not define you, and certainly do not determine your future.

“There are many late bloomers who didn’t so well in school, but later blossomed and excelled in their chosen fields. Conversely there are also cautionary tales of those who scored high early in life, but then became complacent and never quite achieved their full potential.”

He added: “The point is that PSLE is just one assessment in your journey of learning, which will continue for the rest of your life. So take it in perspective. What’s more important is an attitude and mindset to keep on improving and learning, and to excel at whatever you do.”

While the Minister’s advise drew praise in some quarters, it was criticised in others. Although the Government has been trying to move away from an over-emphasis on academic results, some Singaporeans feel that the PSLE remains a tremendous source of pressure for 12-year-olds since their scores determine which secondary schools they can enter.

PSLE scores form a large part of secondary schools’ admissions process. Those who perform very well may get admission into schools like Raffles Institution (RI), which is widely considered an ‘elite’ school, while the options for those who get average or poor scores are far more limited.

A group of netizens responding to Mr Wong’s comment that individuals are not defined by their scores asked why some hiring managers ask to see their PSLE scores if this was the case.

Some shared anecdotes of how firms in the public sector and prominent companies like Singapore Airlines allegedly ask to see prospective employees’ PSLE results even though they can rely on more up-to-date academic results instead of the scores from an examination taken at the age of 12.

Netizens also asked why the Government imposes a national exam on 12-year-olds and why initiatives like the Gifted Education Programme is not available for all students if they are not defined by their scores, if pupils need not dwell too much on their scores.

While some netizens felt that the pressure over PSLE is caused by society, others felt that societal pressure is a result of government policies and that the stories of those who have broken barriers are not as common as one might like to think.

Aside from Mr Wong and Mr Heng, two other prominent cabinet ministers published social media posts to commemorate the release of PSLE results this year. Former Education Minister Ong Ye Kung’s post was similar to the posts Mr Wong and Mr Heng made and he said that students’ futures are not determined by their PSLE scores.

Prime Minister Lee Hsien Loong stood apart from his Cabinet members’ posts. He simply congratulated students and wished them well as they advance in their studies, without making a comment on the impact of PSLE scores: