The Independent Singapore News
Home News Featured News Netizen asks: “I wonder what LKY would have said if he is...

Netizen asks: “I wonder what LKY would have said if he is told his son joins the opposition party?”

Activist Gilbert Goh had posed this question online to which many netizens responded in favour of Lee Hsien Yang with one answer by the founder of Makansutra Mr K.F. Seetoh standing out when he said that LKY was also in the opposition then

Socio-political activist Gilbert Goh posed the above question to netizens and his followers on Facebook after Mr Lee Hsien Yang, youngest son of the late Mr Lee Kuan Yew, announced his membership with the Progress Singapore Party (PSP).

Mr Lee was handed the PSP membership card by Dr Tan. He said: “I joined the party because I think that Dr Tan is committed to doing the right thing for Singapore and Singaporeans. He loves the country and he has brought together a group of people who share his vision, which I believe will build a better Singapore. PSP has an approach which will emphasise compassion.”

Mr Lee Hsien Loong has been part of the People’s Action Party (PAP) since 1986, having started out as the chairman of the PAP Youth Committee, the predecessor to the Young PAP.

In a Facebook post on Wednesday (Jun 25), Mr Goh asked netizens: “I wonder what LKY would have said if he is told his son joins the opposition party?”

Netizens were mostly in support of Mr Lee Hsien Yang with their views, but one answer that stood out was by the founder of Makansutra Mr K.F. Seetoh.

Mr Lee Kuan Yew entered into Singaporean politics through the Communist Party of Malaya. He formed the socialist PAP in an expedient alliance with the pro-communist trade unionists.

This alliance was described by Lee as a marriage of convenience since his English-speaking group needed the Chinese-speaking majority’s mass support base. Their common aim was to struggle for self-government and put an end to British colonial rule. 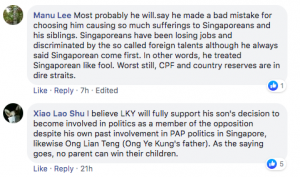 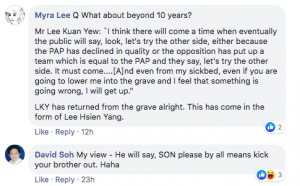