Singapore—One happy mum celebrated her baby’s sixth month birthday by telling the story of his birth on the Pan-Island Expressway (PIE), receiving much kudos on the internet for the feat.

Mummy Sindhu RK Johnson posted the story behind her baby McQueen’s birth on Facebook as she said people had been asking about it. She begins by writing that she has never been one who played by the rules, but having a baby on the highway —“my Dear James Arjuna McQueen came into this world Too Fast Too Furious on the Highway”—was a stretch, even for her.

She wrote to her adorable little boy, “Never in my wildest dream I imagined to be pushing out a human in the car on the way to the hospital with no assistance. Win already la Son, win already ?????? you beat me !

Like what your name (Arjuna) suggest you are truly a warrior to brave 24 degree temperature naked for 20mins till we reached the hospital.”

Happy 6 mths, My Dear Son ❤Here's McQueen's birth story for all those who have been asking me ?Exactly 6 mths ago my…

Before her baby was born, Mummy Sindhu was doing housework and laundry after midnight, which she says is not unusual for her.

When she finished her chores she did a full squat to bend down to kiss her beloved dog, Baron, whom she seems to love almost as much as her baby boy.

As soon as she got up from the squatting position, she knew something had changed, and by 12:55 am, her contractions started in earnest.

She finally woke her husband up 15 minutes later, when she could not even time her contractions anymore, as they were coming so rapidly.

While he did not believe her at first, he quickly rallied and 10 minutes later they where in their Jeep on the way to the hospital, although Sindhu broke her water bag as she was getting into the vehicle.

This hastened her labour and she knew by then she would deliver in the car. Since this was already her second pregnancy, she had good instincts on the matter.

Laying her shawl on the seat of the Jeep, she did try to keep the baby in, but to no avail, he was crowning. Two pushes later and “this ninja turtle looking human” emerged she said.

At first the baby did not cry, but when Sindhu did, “Ninja turtle shrieked n started wailing too.. phew he is good.”

After 20 minutes they were at the hospital, “with an entourage waiting,” Sindhu wrote. “From midwife to nurses to security officers n (sic) few others for this VIP.. only thing is F1 grid girls missing la ? “

She added that the baby’s father cut the cord at the entrance to the hospital “And all was well. Me n son are healthy.”

All in all, her labour took a scant 52 minutes, the average labour time for a second delivery is six hours.

Sindhu also wrote that she believed that her secret to the quick delivery was that she adopted a dog. She explained this as “Good Karma” plus the fact that she walked him for an hour and a half daily, and that she did full squats when she picked it up after it defecated, and cuddled the dog when she was feeling hormonal or emotional. Sindhu wrote, “Being a dog enthusiast, I just had to include my #adoptadog advocacy into this ???.”

She also posted a photo of the baby’s birth certificate, which lists “INSIDE A JEEP ON PIE AFTER ANAK BUKIT FLYOVER” as the child’s place of birth. 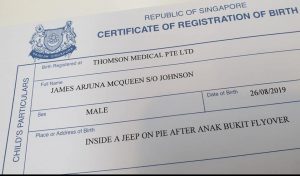