Singapore now has 23,822 confirmed cases, with an additional 504 discharged from hospital. A total of 3,225 individuals have recovered 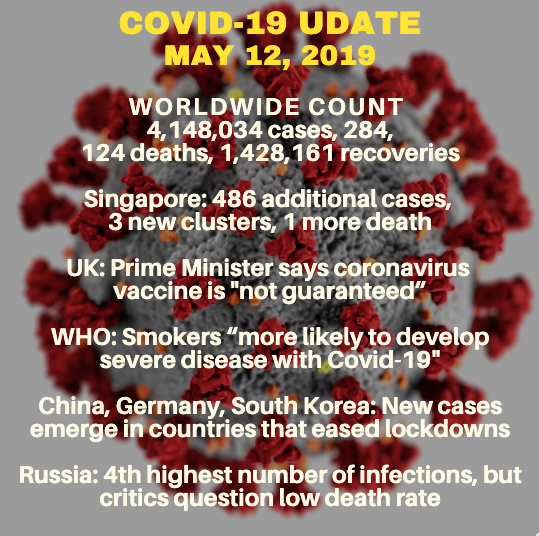 The Ministry of Health (MOH) said on May 11 that there are 486 new Covid-19 cases in the country. Singapore now has a total of 23,822 confirmed cases, with an additional 504 discharged from hospital. A total of 3,225 individuals have recovered.

One more person has died from coronavirus-related causes, a 68-year-old man with a history of hypertension and hyperlipidaemia, bringing the total to 21. Seven other coronavirus patients have died from other causes, with a 53-year-old Indian man positive for Covid-19 dying on May 11 after suffering from a heart attack.

Singapore also has 3 new infection clusters: Tuas South Apartments, one at 47 Senoko Drive and one at 566 Woodlands Road.

Boris Johnson, the Prime Minister of the United Kingdom, said that although he has been “hearing positive noises coming from Oxford, but this (vaccine) is not guaranteed,” adding that after “18 years we don’t have a vaccine for SARS.” His chief scientific adviser, Sir Patrick Vallance, echoed this, saying, “You can never guarantee a vaccine – it is tough,” although he admitted that good strides have been made in the search for a vaccine.

WHO: Smokers “more likely to develop severe disease with Covid-19″

The World Health Organization (WHO) issued a warning in a statement concerning a study of public health experts that discovered that smokers are “more likely to develop severe disease with Covid-19, compared to non-smokers.” Since smoking affects how well a person’s lungs function, this makes it harder for smokers to fight Covid-19 and other illnesses. WHO added, “Tobacco is also a major risk factor for noncommunicable diseases like cardiovascular disease, cancer, respiratory disease and diabetes which put people with these conditions at higher risk for developing severe illness when affected by Covid-19.”

WHO Director-General Tedros Adhanom Ghebreyesus also said that new infection clusters have emerged in countries that have recently lifted restrictions, such as China, Germany, and South Korea. “Over the weekend we saw signs of the challenges that may lie ahead. In the Republic of Korea, bars and clubs were shut as a confirmed case led to many contacts being traced. In Wuhan, China, the first cluster of cases since their lockdown was lifted was identified. Germany has also reported an increase in cases since an easing of restrictions. Fortunately, all three countries have systems in place to detect and respond to a resurgence in cases.”

Russia has shot past Italy to become the country with the fourth-highest number of confirmed cases globally, with 221,344 people who have tested positive for the coronavirus. Moscow has the highest number of cases in the country, with more than half of the total (115,909). The country’s official death toll stands at 2,009, however, which critics question as this may not represent the real countrywide death toll, as Covid-19 may not be listed as the cause of a number of recent deaths. —/TISG