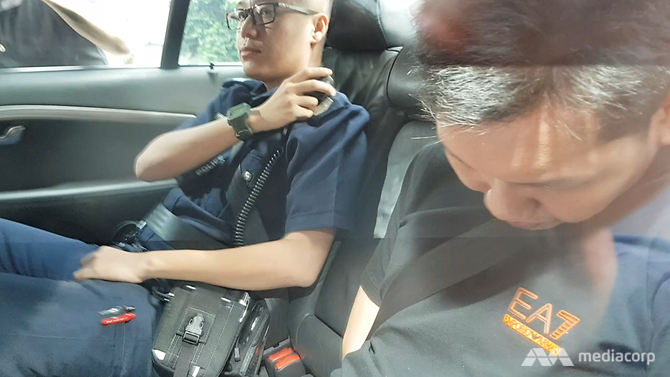 A 33-year-old Maserati driver was charged in court over the weekend after he accelerated his car, plowed into and dragged a traffic police officer for about 100 metres before fleeing the scene.

The driver – Lee Cheng Yan – is believed to have injured the on-duty policeman in the hit-and-run incident, that occurred on Friday night around 9.20pm, to avoid enforcement checks. He was charged with causing grievous hurt with a rash act in court the next day.

A video uploaded on Facebook shows the white Maserati, believed to be the car involved, speeding on the wrong side of the road:

The 26-year-old traffic police officer, Khairulanwar Abd Kahar, suffered serious bodily injuries and was conveyed to the hospital, while the car was later found abandoned at Cedar Avenue.

Police officers subsequently tracked Lee down and arrested him at a HDB unit along Geylang Bahru Road, a few hours after the hit-and-run.

This is not the driver’s first brush with the law.

Lee has been charged for illegal modifications, such as an altered exhaust system, for his Maserati. He has also been charged for driving recklessly and injuring a motorcyclist, causing him to suffer fractures and abrasions, in an Orchard Road accident previously.

He was fined $13,500 this July for the two offenses, after he was caught using the altered car eight times between May 2013 and November 2015.

The court rejected Lee’s request for bail on Saturday and ordered that he be remanded for one week at Bedok police station. He will return to court this Friday and faces a maximum 4-year jail term and/or maximum $10,000 fine, if convicted.