Vehicles forced to stop to avoid hitting him

Singapore—Maybe the jogger was in “the Zone” and was too focused on his run, or maybe he was in a hurry, but the truth is, there was still no reason to endanger his life and others’.

Netizens expressed their dismay at a shirtless man running into the junction of Paterson Hill and Grange Road.

Although he did not have a green light, he plunged into traffic, inconveniencing several vehicles, that had to stop just for him.

Luckily for him, no speed demons hit him.

An 11-second video of the incident from the dash cam of a car was uploaded unto the ROADS.sg Facebook page on May 1.

It was captioned, “Sovereign running, please give way

Insistent shirtless man running across a pedestrian crossing on a busy road illegally.

Location is at junction of Paterson Hill and Grange Road.”

The jogger, who can be seen to the right of the road, does not even break his stride although he sees that vehicles are moving.

Heedless of the oncoming cars, he just kept running.

Several cars and motorcycles were forced to stop to prevent an accident.

Commenters on the video criticised the jogger for his reckless and inconsiderate behaviour.

“What more can I say! My Grandfather’s road. It the “I don’t give a Crap”, attitude that’s causing all these problems. Even pedestrians need to follow rules. No one is above the law,” wrote one netizen. 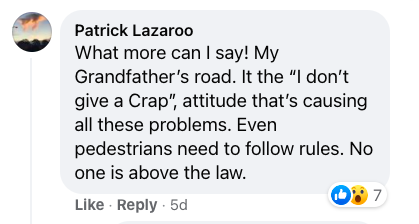 Another seemed to agree, “Our roads are getting more tedious and pathetic to drive and ride with these kind of self-entitled, heck care attitude aliens.”

One netizen said the police used to catch jaywalkers and asked if they don’t take action now.

Another simply asked the question, “Who’s fault if he is found under the wheels?”

This was answered by a commenter.

Others put forth suggestions for catching this type of wrongdoer, “Dash across road endangering others yet no way to identify him. To improve road safety we need to register license plate for every pedestrian and cyclist crossing the road.” One netizen agreed, joking that joggers should also wear licence plates so they can be traced if they do anything illegal.


Read also: Police save monitor lizard ‘just chilling’ in the middle of the road