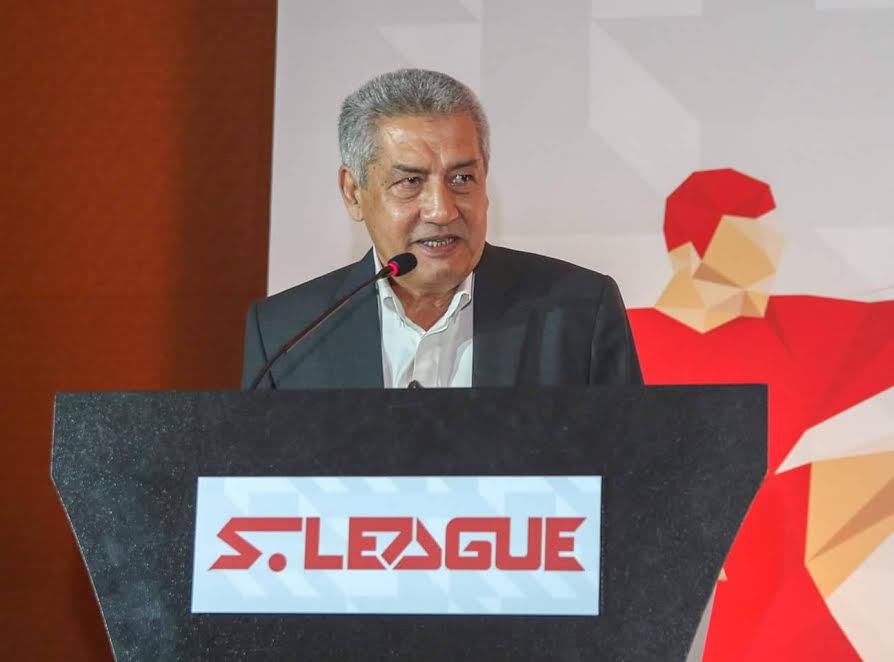 IF he could turn the clock back, former Singapore skipper Samad Allapitchay would pray for the return of the iconic “Kallang Roar’ of the 1970s.

“It was truly a multi-racial bunch of football-hearted Singaporeans, who played for the love, and were willing to even die, for ‘Majullah Singapura’, the national anthem the players sung twice a day, in the morning and evening training seasions,” recalls Samad, who was involved in two Malaysia Cup final wins in 1977 and 1981. He had an outstanding playing record, spanning 13 years from 1968-1981.

Among Ganesan’s achievements during his time as FAS chairman was the strategic shifting of Singapore’s Malaysia Cup matches from the Jalan Besar Stadium to the new National Stadium in 1974. This bold and visionary move led to 55,000 crowds flocking to the Grand ‘Ole Dame to cheer on the Lions and the various national teams, and in turn helped to create the famous “Kallang Roar”.

Samad says: “During Ganesan’s time, he had a group of people who shared the same ideals, same passion, and same ambition to achieve something big, and they did it without any interference. This was what they believed in and worked on as a team, even though sometimes there were little squabbles and arguments. I believe if we are to move forward, we need a big pool of people who share the same ideas.”

But he conceded it will be virtually impossible to replicate what Singapore football enjoyed 40 years ago as lifestyles and family-circumstances are extraordinarily different today. Ganesan was a well-to-do lawyer and the bulk of his team was volunteers who did not face the kind of pressures salaried staff do under their bosses.

Football, Samad says, has evolved into a professional administration the world over and putting together a team that share common ideals, especially with the academic-meritocracy race, is difficult.

“I’ll be honest. It is easy to find a civil servant at the top bracket of the salary range and ask him to administrate,” he says. “He will probably do a good job, but whether he can assemble a team that can bring glory to Singapore football, I very much doubt it. Just like a footballer, you require exceptional skills to put up a good team and it is not easy.”

But the legendary Singapore skipper is back when it matters to be counted at the upcoming FAS elections on April 29 and he’s one of the lead ambassadors in “Game Changers” after Bill Ng convinced him that he has a national role to play in bringing Singapore football back to its feet.

Samad was the Lions skipper from 1977 to 1981. He’s one of the few elite players in the FIFA Century Club with 105 “A” international caps. And he was among the pioneers in the FAS Captains’ Advisory Panel (CAP) in November 2009

At the height of his prime, in the 1970s and early 80s, he had a regional reputation as a hard-tackling, no-nonsense defender with a penchant for bulldozing his way from defence to attack. FourFourTwo magazine describes him as “widely regarded as the finest defender that Singapore ever produced…who took no prisoners and he led by example with his crunching tackles and superb organisation”.

Much as he is recognised as an iconic FAS role-model, Samad feels enough patronising is enough, and he has to speak up, especially with the fast declining form of the Lions. And he has a moral obligation to offer constructive suggestions, for national interests.

His decision to join Bill Ng’s “Game Changers” is viewed as a surprise move but he stands by it as he believes it’s high time for a refreshing change in Singapore football.

He says:  “Actually, I could no longer see the sport continue to decline…now it’s time for a drastic change in order to save the country’s football. So, when I invited Bill and after hearing his plans for the future of football in the country, I felt the urge to play my role and decided to join forces for the sake of bringing about positive change in this sport.”

Samad, who will contest to be a FAS Council Member, rightly says that “sportsmanship and gamesmanship must win in the FAS elections”.

He adds: “I’ve good friends on either platform of this election. But we must contest, in reaching out to the 44 FAS-affiliated clubs, in a dignified and respectful manner. Whatever the result, Singapore football must be the winner.”

He’s now enjoying his ambassadorial role. He also plays a senior leadership role as non-playing skipper in the annual Sultan of Selangor’s Cup playoff, with 2017 marking the 16th edition of the friendly tournament that was introduced to commemorate the old Malaysia Cup rivalry between Singapore and Selangor. Now for the first time in eight years, Selangor will be the visitors at the Sports Hub, which was re-opened three years ago.

He also believes that the former international players, from the 1970s onwards, must be motivated to come forward to play a positive role, either as non-playing ambassadors or as active coaches or educators to spur the younger generation, right down to the HDB heartlands.

“There’re so many kids keen to have a shot at football, be it at the void decks, neighbourhood parks or even primary schools,” he says. “Let’s give more priority to encourage them so that they can do their best, say 10 or 20 years from now, to help further boost Singapore football.”

A true-blooded Singaporean, Samad always believes in a Singapore-first policy and for nurturing home-grown talent, especially for the role as national coach. He says: “A local coach understands the culture, the players and how to talk to the players’ families. It’s about time we give a local coach a chance. It’s not like there is a shortage of quality. We have many coaches with the Pro Diploma.”

Like father, like son: Samad’s youngest son is Tampines Rovers and Singapore  defender Shariff Samat.  He made his S-League debut for the now-defunct Sembawang Rangers in 2003 and has played for various clubs like Home United, Hougang United, Tampines Rovers, Woodlands Wellington before joining Geylang International at the start of the 2016 season.

Samad believes that under Bill Ng, there’s a genuine shot for change as the business-minded Hougang United Chairman is bold for refreshing changes, right from the top to the grassroots.

“Listening to Bill talk of a forward-thinking football philosophy inspires me a lot and that’s one of the reasons I’m putting my weight behind him in the ‘Game Changers’,” says Samad.

“It’s high time for a serious change to try and push football to the best possible level. It will take time and I want every candidate, whichever side you’re on, to play a constructive role towards football development.”

Hopefully, under Bill Ng, the “Kallang Roar” will return to the new SportsHub one day. And make Samad a very happy man.

‘Game Changers’ is led by popular businessman Bill Ng and the alternative team of 15 football-hearted personalities will be contesting the FAS elections on April 29 at the SportsHub.