Home News Education ‘Feels like gaslighting, and the app is useless’ — Teachers unhappy with...

‘Feels like gaslighting, and the app is useless’ — Teachers unhappy with MOE’s AI therapy chatbot

Although on paper, the idea behind therapy for teachers that are accessible online is certainly a good one, it may not be the case in reality as those that have used Mindline at Work have found.

The free online AI mental health chatbox service app that was launched jointly by the Ministry of Education and the Ministry of Health in August this year, has proven to be less than effective.

A short while after the app was launched, screenshots of the therapy sessions made the rounds online.

On the ed_ffirmations Instagram account, where educators vent anonymously about their daily lives and workload, the screenshot was captioned “it seems to be doing a lot of gaslighting rather than concrete action.” 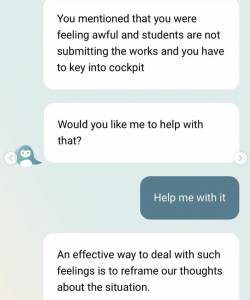 The generic advice the chatbots gave did not deal with teachers’ specific problems, according to a Nov 29 article in the global tech website Rest of World.

“Just days after the extension’s launch, though, complaints began to emerge. Irate users were unimpressed by the bot’s generic advice, and said it wasn’t the right tool to address the actual problems leading to teachers’ stress — a demanding performance appraisal system, large classroom sizes, and uncapped working hours,” the article reads.

Some teachers spoke to Rest of World, requesting anonymity as they had not been given permission to speak to the media.

One teacher in his 20s who went by “Mr Chow” said in the article that from a teacher’s perspective, the app was “pretty useless lah.”

He told the site that he has so much overtime work —for which he is unpaid—that in reality, his hourly pay is less than S$10.

“Sometimes you feel like your brain is going to crack,” Mr Chow added, as he juggles classes and administrative work, as well as running an extracurricular group.

“It’s a joke. It’s trying to gaslight the teacher to say, ‘Oh, this … workload is normal, let’s see how we can reframe our perspective,” he added.

In the popular online blog and zine, Boing Boing, the advice the app has given is described as seeming “to be a bunch of generic mental health platitudes that make patients feel frustrated and unstable.” /TISG

Is SG sexist against males? — Men find it harder to seek mental health help as they’re expected to be ‘strong, stoic & emotionally resilient’