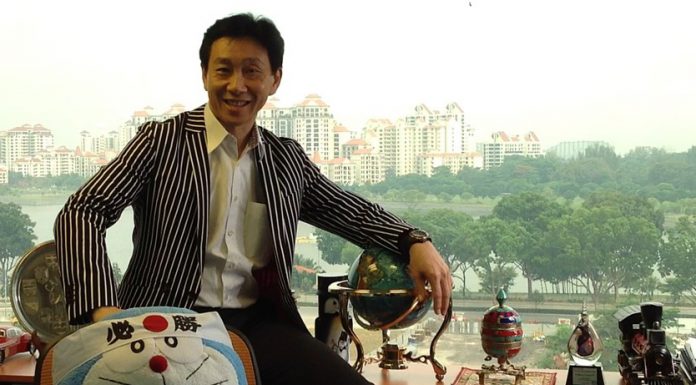 THE Game Changers’ final closed-door dialogue with football affiliates was held on Thursday, just a stone’s throw from the historic Sultan’s Mosque along Arab Street.

But the evening’s quiet tranquility along the iconic mosque was broken several times as rousing applause saluted the return of the Hougang United chairman in his first public appearance since his arrest last week following a police probe into the suspected misuse of funds at Tiong Bahru Football Club (TBFC), the amateur National Football league club that he owns.

He’s out on police bail, but the 57-year-old businessman, who is leading Team Game Changers into Saturday’s historic Football Association of Singapore (FAS) elections, spoke with heart and conviction at the famous nasi ambeng Padi Restaurant in Bussorah Street.

Significant that the Masjid Sultan, as it is also known, a prominent mosque in Singapore and one of the country’s most impressive religious buildings, was used as a backdrop as the spirited presence of over 30 FAS affiliates showed that they believed in his iconic leadership.

Never a personality to pull punches, he candidly admitted that it’s been a “roller-coaster ride for him”, but Ng warmed the hearts of the club representatives with his sincerity and honest approach.

In a nutshell, he promised that the longer-term goal of the Game Changers still remains to improving the ecosystem of local football if his team is elected.

“I’ve the highest confidence in the solidarity of the team and the belief of the affiliates because we stand strong with the individual and team qualities of Game Changers,” he reiterated throughout the three-hour long session, which was not open to the media.

Several times, loud applauses were often heard from the first-level restaurant lounge  where the dialogue was held, a clearest signal that the affiliates stood by him despite the recent donation controversy and police raids.

Ng sought to keep confidential majority of his explanations as “I’m under investigation” and assured that he intends to offer “full co-operation to the authorities”.

Game Changers spokesman Steven Tan, the former FAS executive secretary, also shed some light on what was discussed during the session.

“We had a very fruitful discussion,” said Tan. “He (Bill) shared the principles of Game Changers, explained the sacrifices that he has made (for Singapore football), and to remind them about why the team is contesting the elections in the first place.

“Other members of the team, such as (Vice-President elect) Dr Teoh (Chin Sim) and (Deputy President elect) Lau Kok Keng, as well as the individual council members aligned to us, also spoke with the affiliates.

“The rousing string of applauses you heard clearly showed that the affiliates were fully behind Bill and the team and we are very positive heading into the elections.”

In startling unexpected chain of events this week, plainclothes officers of the Commercial Affairs Department (CAD) raided the clubhouses of Hougang, TBFC, Woodlands Wellington and the FAS headquarters following a report filed by Sport Singapore (SportSG) into suspected misuse of club funds at TBFC.

Following the raids, Ng, his wife Bonnie Wong, former FAS president Zainudin Nordin and FAS general-secretary Winston Lee, were interviewed by the authorities. They were then arrested, and are now out on police bail while still assisting in investigations.

Ng’s Game Changers will be taking on Team LKT, which is led by former FAS Vice-President Lim Kia Tong, in the elections, which will be held at the SportSG Black Box Auditorium at the Singapore Sports Hub.

Tampines Rovers chairman Krishna Ramachandra, who is one of the Vice-President candidates, praised the “very professional approach Bill Ng took in addressing the affiliates”.

“He pulled no punches, he was straightforward and answered candidly to every question from the affiliated clubs. He reiterated to Game Changers to go in to Saturday’s elections with solidarity and belief to win the hearts of the affiliates with the sole goal to improve Singapore football,” he said.

President of National Football League (NFL) side Starlight Soccerites Arriola Buenaventura Alphonsus gave the thumbs-up primarily because, like majority of the FAS’s 44 affiliates, they felt shut out for years. He said: “They (the FAS) would always say the same thing that they will improve soccer and the club scene, but nothing changed.

“I’ll be dead honest. For 20 years I opened my mouth and they didn’t give a damn. Several of my NFL colleagues feel the same way. We’ve told the FAS that it’s too late. We should give the new people a chance to prove that they can do good for Singapore football.”

Harman Ali, the Chairman of NFL Division Two GFA Victoria FC, who is running as part of Team Game Changers’ slate of nine, said: “We came out of the meeting very inspired. Bill Ng proved himself to be a rousing leader even under intense pressure of investigations. It’s rousing to see the affiliates are supporting us all the way. We are looking forward to the elections on Saturday.”

Zaki Ma’arof, President of NFL Division Two Kaki Bukit Sports Club, who is contesting for one of the Vice-President roles, hailed Bill Ng’s “remarkable confidence in explaining that his football philosophy remains high on the agenda and that’s sincerely to promote local football”.

“He speaks like an inspiring icon. Very passionate, sometimes emotional, but deep down, you got to believe the football in this man, You have to trust him because he is sincere and serious, especially in boosting from the S-League, to the National Football League, the Women’s League, the Singapore Business Houses Football League (SBHFL), Singapore Government Services Football League (SGSFL) and most importantly, in firmly developing grassroots football,”

said Zaki, the Past Deputy President of the Singapore Malays Chamber of Commerce.

“Believe me, satisfaction is not the key word (after hearing what Bill had to say). We have been supporting Bill from Day One and that has never wavered. We will stand behind him all the way.”

His first public appearance, however, ended on a very low-key note as Ng declined to speak to the media and made a discreet exit through the back door at 10.30pm.

Nevertheless, the media tried to ambush him but Ng, attired in a smart white shirt and black pants and carrying a bottle of water and a bag slung over his left arm, simply walked to a waiting car.

Still smiling with the flashing camera bulbs, he said before slipping into the car: “Thank you very much. Thank you for your support.”

For the moment, if the rousing applause is anything to go by on Thursday, in the vicinity of one of Singapore’s oldest mosques, the prayers from football folks indicate clear signs of a welcome vote of confidence for Bill Ng.

Saturday’s FAS elections will see 44 affiliates eligible to vote in the first democratic elections in the 125-year FAS history and a team will need two-thirds of the votes in order to be elected.