Former Singapore President Tony Tan Keng Yam was conferred the nation’s highest civilian honour yesterday. The 78-year-old received the Order of Temasek (First Class) from his successor, President Halimah Yacob, for his “lifetime dedication to public service and his stellar service to his people and country.”

Referring to Dr Tan’s four-decade career in the public service, his citation reads: “The breadth and sweep of his service have been equalled by few.”

Before he became President, Dr Tan had helmed five ministries in the Government as a ruling party politician. The national broadsheet notes that Tan was founding Prime Minister Lee Kuan Yew’s top choice to be his successor, but Tan declined the promotion.

Despite his success within the echelons of the ruling party, Dr Tan has been embroiled in quite a few controversies during his time in the Government.

Besides his clash with beloved President Ong Teng Cheong over union disputes in the 80s, Dr Tan is also remembered as one of the prominent opponents of the construction of the MRT system. Going head to head with Ong again, Dr Tan proclaimed that it would be foolish to go ahead with the MRT project: 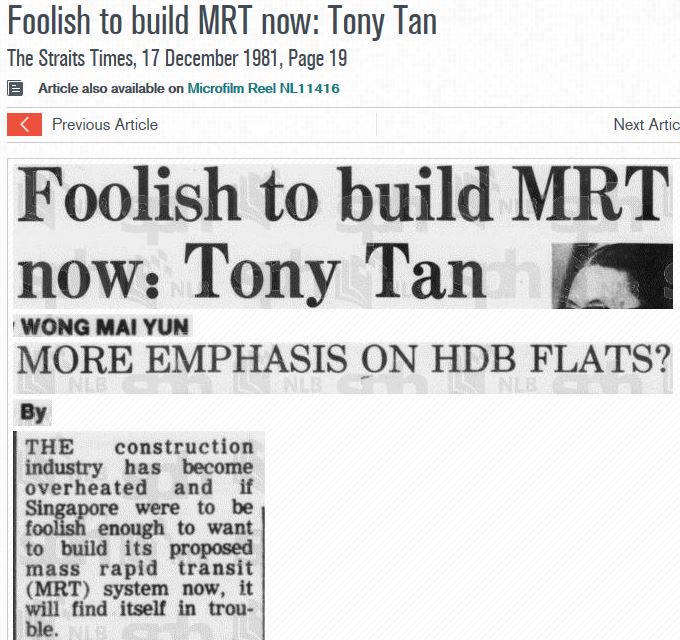 Then, in 2011, Dr Tan responded to online allegations that his son Patrick Tan had received preferential treatment during National Service (NS) in Singapore, since Dr Tan led the Ministry of Defence.

Noting that he only led the Defence Ministry after Patrick began NS, Dr Tan said, “My sons all completed their National Service obligations fully and I have never intervened in their postings.”

In 2016, Dr Tan was accused of not being supportive of increased funding for polytechnics and ITEs. PAP member Tay Eng Soon’s brother, Tay Kheng Soon, said at a public forum:

“As you all know my brother, the late Tay Eng Soon, was the Minister of State for Education, he fought for ten years within the cabinet to increase the funding for the ITEs and Polytechnics, and his career prospect within the party was actually truncated by it. The reason was – he never told me what actually happened, loyalty to the party, right?

“After he died, his wife told me the real story. All the time, Tony Tan, that’s why I have no respect for Tony Tan at all. Tony Tan said to him all the time, all through the ten years, ‘Why do you want to throw good money after bad rubbish?’ I cannot stand this. This is the inherent elitism. You have to break that.”

Tan denied this accusation and told the press, “I did not make any such remarks. The claim is very hurtful because when I was a Cabinet Minister, the education of children was very close to my heart.”

He added, “For that reason, when I was Education Minister, I increased support for the education of all students, with a particular focus on children in polytechnics and ITEs, or what was then the VITB. It is therefore very sad that such a thing should be said about me.”

https://theindependent.sg.sg/president-tony-tan-roasted-for-calling-schoolings-olympic-win-highlight-of-my-presidency/Follow us on Social Media