The Independent News
Home News Featured News Criticism against Nas Daily continues despite Govt's assurance that he did not...

This, despite the Ministry of Trade and Industry's assurance that Nas and his team had received a Time-Limited Exemption (TLE) to conduct the filming

Criticism against prominent vlogger Nas Daily for filming a video in public during Singapore’s lockdown-style ‘circuit breaker’ period has continued despite official confirmation that the production was approved by the authorities.

The Government has introduced several measures to fight the spread of COVID-19, including a lockdown-style ‘circuit breaker’ period in which non-essential workers are asked to work from home, wear masks if they need to go out for essentials and practice safe distancing.

Those who flout the circuit breaker measures, which went into effect in the beginning of April, could face fines or imprisonment.

Nas, whose real name is Nuseir Yassin, published a Facebook video on 23 Apr that featured him going down to Masjid Sultan at Kampong Glam. The video, entitled “Can Covid-19 cancel Ramadan?”, covered how Muslims and religious institutions are coping with the strict virus prevention measures during the Ramadan season.

Some netizens responding to the video questioned whether Nas’ outdoor video shoot was in violation of the measures that were put in place to flatten the COVID-19 infection curve.

Companies that need to deploy employees to work on-site for a limited amount of time can apply for TLEs. If approved, a company can activate a limited number of employees to work on-site for less than a day while keeping to safe distancing measures. Companies must submit TLE applications at least one day prior to the required date of use and may submit up to two TLE applications each week.

Despite MTI’s assurance, netizens have continued to criticise Nas. Many responding to the news article covering MTI’s statement asked whether the vlogger was also exempted from wearing a mask in public.

In several shots in the video, Nas can be seen bare-faced with his mask pulled down to his chin. Wearing a mask in public is mandatory in Singapore and those who flout the rule will face fines or prosecution in court. Only those engaging in strenuous exercise outdoors are exempt from this rule during the period of their exercise.

While some commented that Nas was just trying to spread positivity, others asked whether he was exempted from wearing a mask in public. Some netizens recounted stories of being warned by safe distancing ambassadors when their masks inadvertently slipped on their faces while others wondered whether his production work is considered essential: 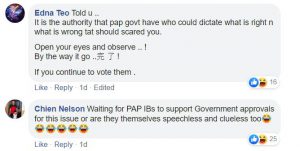 Nas, a Palestinian-Israeli, moved to Singapore with his partner and his entire company, in March last year. While the vlogger has had positive experiences with ruling party politicians and Government bodies, he has also faced backlash from Singaporeans.

In 2018, Nas sparked a massive uproar when he lashed out at Singaporeans and called them “crybabies,” after he was criticised for calling Singapore an “almost perfect country” in one of his videos.

In response to questions about whether he was sponsored by the Government to come to Singapore and make videos praising the country, an impassioned Nas asserted that his Singapore videos “are 100% not sponsored by anyone”.

More recently, Nas praised the Government’s response to the COVID-19 pandemic in a video released in February.

Singapore’s efforts in curbing the virus was once widely considered the gold standard of dealing with the pandemic – until gaps in the management of the outbreak were exposed when the infection spread rapidly throughout the foreign worker dormitories. To date, there are close to 27,000 COVID-19 cases in Singapore and 21 disease-linked fatalities.