When some of the groceries were running low, individuals who are referred to as “Invincible Heroes” stepped up to the plate, reaching out to fill the contents.

Singapore—With the fallout from the Covid-19 pandemic, many people are hit by the financial downturn.

However, one thing that has not been in short supply is kindness, with Singaporeans always thinking of creative ways to help one another.

The latest example is in a community in Yishun, where grocery shelves have been set up on a void deck for people to have access to food when the need arises.

It is an endeavour started by The JumaatInitiatives called Suspended Groceries, a “collective effort” for “temporary aid.”

In a short introductory video, the people behind the endeavour encourage others to “seek further assistance from relevant organizations,” saying Suspended Groceries is a stopgap measure for those who are hungry.

Furthermore, participants seem to be expected not only to be on the receiving end but on the giving end as well, whenever they are able.

“Take what you NEED, give what you CAN,” the video says, followed by a montage of basic grocery items such as Milo packets, cooking oil, sardines, canned fruit, spices, tea, rice, and others.

In the caption to the video, Mr Hazwan Tahir, who launched The JumaatInitiatives with some friends on September 26, explains further. “Suspended Groceries is intended for those urgently in need of the most basic human need, Food.

“Be Gracious in giving. Be kind in sharing.”

The group’s posts are public so that anyone who wishes to donate to their community grocery shelves may participate as well.

The exact address of the void deck where Suspended Groceries is located is at Blk 513C Yishun St 51, near MPH.

In another post, Mr Hazwan wrote further as to who was welcomed to help themselves to the food.

Take What You Need:

If you’re at your wits end waiting for your salary,

If you’re waiting for the approval of any financial aids,

If you’re scrimping on every bit of rice left for your kids,

If you’re wondering whether today you can have food on your table,

He also made an appeal for would-be donors, pointing out that, “A good neighbour does not sleep well knowing his neighbour goes to sleep hungry.”

“Give What You Can: Never feel that no amount of help is too small…Your compassion and support will surely tide them through.”

And on September 28, when Mr Hazwan posted that some of the groceries were running low, individuals whom he referred to as “Invincible Heroes” stepped up to the plate, reaching out to him.

Some are not even from the area. Some generous people offered grocery items delivered by Fairprice and Redmart. 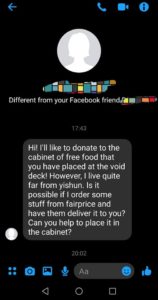 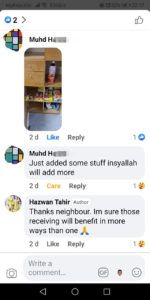 Mr Hazwan says that he endeavours to check on the supplies daily, and urged donors not to leave perishables, and to make sure that the groceries they leave are still within the expiry date. -/TISG

Read also: The kindness of strangers: 3 young men change flat tyre in the rain past midnight for mum stranded on SLE

The kindness of strangers: 3 young men change flat tyre in the rain past midnight for mum stranded on SLE