Calvin Cheng: Cancelling free-trade agreements such as CECA will not protect local jobs

The answer, he says, lies in Singapore transforming into a "digital trading hub" that will "connect the world"

Singapore — In a Facebook post, former Nominated Member of Parliament Calvin Cheng has argued that cancelling free-trade agreements such as the India-Singapore Comprehensive Economic Cooperation Agreement (CECA) will not protect local jobs but, instead, hasten job loss.

The answer, he said on Saturday (Sept 26), lies in Singapore transforming into a “digital trading hub” that would “connect the world”.

Mr Cheng, who is known to be a strong supporter of the People’s Action Party government, wrote his post on the premise that many PMET (professionals, managers, executives and technicians) jobs need no longer be done on a job site or at a physical location at all, as shown by work from home (WFH) arrangements due to the Covid-19 pandemic.

What this has meant is that people overseas can now compete for local jobs in Singapore.

“If you can do your job in your home, I can just as easily get a guy in Slovenia, Mumbai, Hanoi, Shanghai to do that same job, as long as he does it just as well. Better still if he does that job better and cheaper.”

Therefore, a Singaporean will end up competing for a job “in a digital world” not only with foreigners in Singapore, but from all around the world.

And the fact that jobs are no longer tied to physical locations means that Singapore would “lose our relevance as a physical hub.”

Hence, Mr Cheng proposes the solution of the country being transformed into a digital hub.

He added that the “location of Chinese and American Internet regional HQs in Singapore is an important step towards this goal”.

But what is necessary, he believes, is a shift in people’s mindset. “Singaporeans have to re-align their mental frameworks to make themselves relevant to the entire world. Protectionism will just make them lose their relevance even faster.”

One of those commenting on Mr Cheng’s post pointed out that it was now up to  Singaporeans to “grab that job which is now available to us with remote working”. Another person asked Mr Cheng to expound on the idea of a digital hub, which the latter said he would in a later piece. 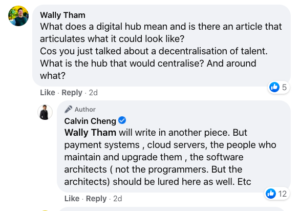