Home News All public transport fees will go up 6 to 10 cents per...

All public transport fees will go up 6 to 10 cents per trip by Dec. 29, and people are not happy

Commuters, heads up. In September, the Public Transport Council (PTC) announced that the fare review they had been conducting was at an end, resulting in a fare raise across the board for all public transportation – 6 cents in some cases and 10 in others. The increase, which will take effect on December 29, 2018, has gotten Singaporeans talking, and most are definitely not pleased.

The declaration of an increase in public transport fares came after the PTC noted and reminded everyone that the fares have been decreasing over the last three years, with a total decrease of 8.3 percent.

In 2015, fares dropped by 1.9 percent. In 2016, they went down again by 4.2 percent and then slipped even lower by 2.2 percent last year. The PTC said that, in light of the steady decrease, this year’s increase should not be too difficult for commuters to handle.

Associate professor at the Singapore University of Social Sciences and one of PTC’s council members, Vincent Chua, told another media source that the fare hike “should not result in fares increasing by more than 10 cents per journey”.

On October 30, the PTC announced that this year’s fare increase is around 4.3 percent.

Senior citizen and student bus cash fares will not be increased but will remain the same, said the PTC. Monthly concession passes and adult money travel passes will also not be subject to an increase.

Persons with disabilities and lower income workers, here is what you need to know about the increases:

Bus fares will be 64 cents for lower wage workers with a concession card and 55 cents for disabled persons.

Train fares will also be 64 cents for lower wage workers and 55 cents for disabled persons. Boarding before 7:45AM will mean a 50-cent discount on the fares.

Lastly, disabled persons do not need to pay additional fares for distances that go beyond 7.2KM.

The 4.3 percent increase in fares will go to the operators, amounting to a total of $78.2 million more in fare revenue per annum.

Bus fares collected will go up by $43.2 million and will assist in reducing bus operating subsidies – the $1.1 billion that the government has poured into supporting our supply of buses.

In return, according to the PTC, both operators have to contribute 5 percent (amounting to $1.75 million) of all increased fees collected to the government’s Public Transport Fund, $9 million of which the Ministry of Transport will use to issue 300,000 public transport vouchers (the most number of vouchers ever given) to subsidise travel for lower-income households.

Despite the fare decreases over the last three years, Singaporeans are not happy to hear about this year’s 4.3 percent increase. According to some, the seemingly tiny 6 or 10 cents increase per trip still adds up to a considerable amount over a longer period of time, money that people would much rather save.

This netizen thought that the increase was not an amount to be worried about:

But this person’s response shows how some people think about saving even a few cents here and there: 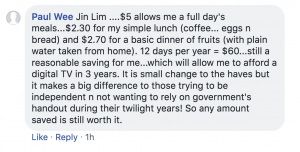